CLASSIC SHOWROOM
Brought to You by: www.classicchatter.co.uk

Snippets: The Philipsons
The first owner of 167XJ was Oliphant James Philipson whose family members are fascinating – his grandfather was Hilton Philipson 1832/1904 who made his money in law, coal & shipping amongst his descendants are his sons Ralph Hilton Philipson (1861/1928) whose 1st wife was Florence Woodward a Californian heiress (died 1914) & 2nd wife was Baroness Maya de Knoop - widow of a wealthy Russian; Hylton “Punch” Philipson (1866/1935) owner of Stobo Castle and a cricketer of international standard; grandsons Hilton Philipson (1892/1941) MP whose wife Mabel was an actress & widow of Thomas Stanley Rhodes (nephew of Cecil Rhodes); Max Woosnam (1892/1965 & cousin to Oliphant) perhaps the greatest all round sportsman of the 20th Century – snooker player, international footballer (England), cricketer, tennis player (Olympic Gold), golfer & shooter (Bisley)! Hylton Murray (1902/34 brother of Oliphant) who was gifted Stobo Castle by his father but died in 1934 the year before Hylton Philipson Snr. In 1930 Oliphant James Philipson married Yvonne Gabrielle Kreglinger whose family started business in 1797 as woollen merchants and today their diverse business interests incorporate vineyards (Australia), furs & wools (Russia), chemicals, shipping (Belgium), refrigeration (Brazil). The marriage did not last and in 1944 Oliphant Philipson was granted a divorce from Yvonne on the ground of her adultery with a Mr Allan Lund, Oliphant later remarried but apart from Yvonne entering Brazil in 1954 little is known of her destiny. Oliphant’s private homes included East Layton Hall at Richmond; Tanyard Manor at Sharpthorne and Scarcroft Lodge, Thorner. Later owners of 167XJ include Miss B Robb of Totteridge and a Herbert R. Green of London.

Posted by jeffharris at 18:27 No comments:

SHOWROOM CLASSIC
Brought to you by: www.classicchatter.co.uk

1965 CHEVY ½ TON PICKUP£9,995
Manufactured and sold new in California, and stayed in California in the hands of the original owner until 2012. Completely original, even down to the engine stickers still on the rocker cover. The supplying dealers sticker is still attached to the tail gate. Hardly any wear to the rubber mats. Original radio still intact and working. Original specification is 283ci V8 engine with 4-speed manual floor change and big back window. Without doubt one of the most original Chevy trucks I have seen. English registered with tax and MOT.
Please phone for more detailed information.
Contact:
Office   01708 375982

Posted by jeffharris at 16:17 No comments:

CLASSIC OF THE DAY
Brought to you by: www.classicchatter.co.uk

1969 BMW Alpina 'Batmobile' 3 Litre Group 2 CSL
Chassis: 2201659
Chassis number 2201659 was built May 27th 1969, as a road going 2800 CS in Tundra Green metallic. BMW loaned the car to Alpina to compete in the Spa 24 hours race on the 26 and 27 of July 1969. The car was prepared by Alpina and appeared as a near standard road car except for the removal of the bumpers, a side exit exhaust and and spot lights as visible in the photograph. Other modifications are not known at this time but may have included suspension and geometry setup and further engine tuning. Helmet Kelleners and Nicolas Koob shared the driving duties qualifying in 9th position, finishing in 9th overall and 8th in class

BMW sold 2201659 to Alpina on October 28th 1969 along with three more brand new 2800 CS’s. Alpina prepared all four vehicles to the current FIA Group 2 regulations for the 1970 racing season. The cars were all fitted with bubble arches to cover the wider split rim wheels. The engines were bored out to just under 3 litres which was the maximum for their class. They ran with a full race camshaft and three Weber DCOE carburetors. Racing fuel tanks and roll cages were fitted along with Scheel racing bucket seats with the rest of the original interior remaining in place. The cars were painted in the famous and distinctive Alpina livery of Colorado Orange and Satin black. All four cars were registered for road use and carried the registrations numbers KF-SC1, KF-SC2, KF-SC3 and KF-SC4. This car was registered KF-SC3. Alpina campaigned these cars across Europe in the ETCC and DRM championships which included endurance events at Spa and the Nurburgring with a number of drivers

The first race of 1970 was the ETCC race at Monza. A strong drive from Alex Soler-Roig and Helmut Marko put the car in 5th on the grid but a broken gear lever meant that they would fail to finish. At the next outing for the ETCC at the Salzburgring Alex Soler-Roig put the car on pole and finished 1st with the fastest lap time of 1.28.600. At the Brno 4hr race on May 24th 1970 Helmut Kelleners was back in the car for the first time since 1969 along with Gunther Huber. The pair only qualified 7th but a determined drive saw them on the podium with a 2nd place finish. A number of DNFs and DNS’s followed in the 1970 season with a 1st in class at the Lorch Bergrennen, Onsabrucker Bergrennen, and the Hockenheim Hessenpreis.

At the end of the 1970 season. Alpina sold 2201659 to BMW Denmark to be driven by Jens Winther. The livery was changed only slightly with the satin black being replaced with red. For the 1971 season BMW Denmark addressed the reliability issues and went on to win the 1971 Danish Touring Car Championship with three 1st place finishes and five 2nd place finishes for Jens Winther. The Danish Touring Car Championship did not run in 1972. Jens Winther only raced the car once in 1972 in the DRM Diepholz on July 16th qualifying 13th and finishing 9th

2201659 did not compete in 1973 and was eventually sold in October to Finnish driver Tuisku Urpiala. After a visit to Alpina in Germany, Urpiala stripped the car down and rebuilt it as a Group 2 BMW 3.0 CSL. He ordered all the necessary parts from Alpina including a 360 bhp 3.5 litre race engine with slide throttle fuel injection, modified front axle subframe, modified rear subframe and suspension, altered trailing arms, shortened drive shafts, final drive support and oil pump, progressive coil springs, Bilstein dampers, adjustable anti-roll bars, aluminium brake disc supports and a plastic front spoiler. The bubble arches were removed and replaced with larger Group 2 arches. The interior was removed apart from the dashboard, headlining and door cards. The standard gauge panel was replaced and new gauges fitted.

The inside of the car was painted blue with a white exterior. Blue and red stripes similar to the marks cars were also added. The CSL aerodynamic kit was also added at this point which includes the boot lid spoiler, rear wing and roof spoiler. It would appear that the doors skinned in aluminium were added as well as an aluminium bonnet and boot lid. Elaborate pipe work ran through the interior to transport fuel and oil and a new 8 point roll cage installed. It would appear that the only original items to be retained other than the dashboard and door cards were the driver side Scheel racing bucket seat and the BMW sports steering wheel. 2201659 was prepared for the 1974 Finnish Championship where Tuisku Urpiala finished 2nd overall. He returned with the car in 1975 and 1976 winning the championship in both years.

The current owner discovered the car in storage and recognizing its importance bought it and set about a comprehensive re-commissioning. Race preparation specialists CCK carefully stripped the car to the shell and set about the rebuild, crack testing suspension parts and sub-frames before re-assembly but with the emphasis on retaining originality. Original parts were refurbished rather than automatically replaced. For example the Bilstein shock absorbers and uprights were rebuilt by Bilstein. Both the gearbox and back axle were examined and found to be in very good condition. The engine however has been replaced with a new unit built by specialist Lester Owen that has been dyno’ed at 370HP It is fitted with the original ancillaries including the fuel injection and dry sump oil scavenge arrangements. The old engine is included in the sale.

The car is presented in its 1974 specification and is accompanied by a weighty history file confirming its provenance and includes a wealth of Alpina Invoices, letters and correspondence. This unique and highly significant car has retained an unusual degree of originality and comes from an era in motor racing that is growing in importance.

Chassis 2201659 was the first 2800 CS Works racing car. It had a hugely successful and well documented international history, cementing the bond between BMW and Alpina and was ultimately developed into one of the formidable 3 Litre Group 2 CSL ‘Batmobiles’. FIA HTP papers are in process

Posted by jeffharris at 11:22 No comments:

1949 HRG 1500cc 4 Seat Roadster
Chassis No. W185. Engine No. C11635. Finished in British Racing Green with brown leather trim. Built on 14th April 1949 this HRG was sold new by Brown & Dureau of Collins St, Melbourne who commissioned a one-off four seat body. One of only 251 HRGs, W185 was rallied by Australian Grand Prix winner Doug Whiteford and Reg Nutt for Brown & Dureau. Laid up since the early 60's restoration was started approximately 10 years ago in Australia. In 2012 this motorcar was imported to the UK where a most thorough major restoration was completed. Only close inspection will reveal just how much detail the current owner has gone into restoring this motorcar. This represents a very rare HRG and is the first time ever offered for sale in the UK. UK registered with V5C, on the button and ready to go.   £45,750

Posted by jeffharris at 12:05 No comments: 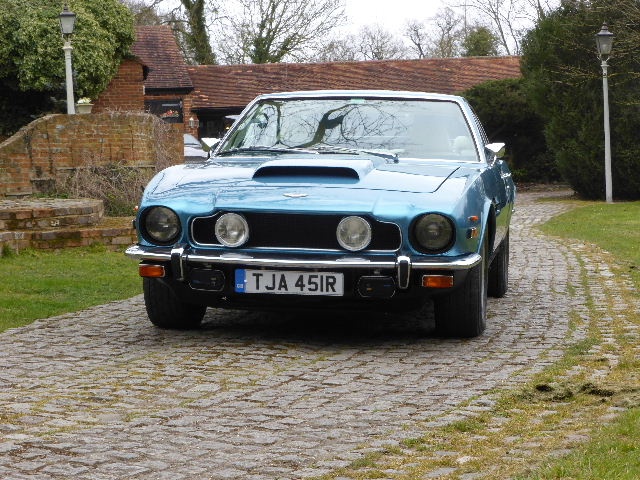 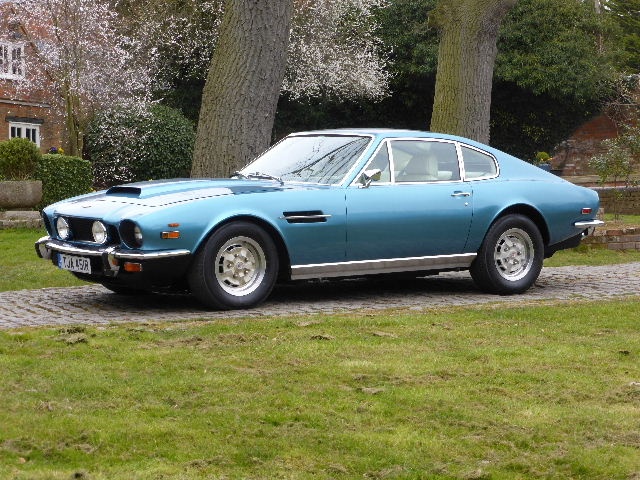 This is a beautiful 1977 Aston Martin series III V8 finished in Tourmaline blue with Magnolia hide interior. According to the British Motor Museum, it is a matching numbers originally built for the home market in September 1977. It has an original "S" spec engine with increased brake horse power and performs very well on the road. The engine holds excellent oil pressure and runs at the makers recommended temperature even in heavy traffic. It has spent some time in the USA and since being repatriated in 2014 it has had considerable improvements carried out. These have included a full sill restoration and a back to metal repaint that has been done to a very high standard.    This is an opportunity to acquire an excellent  V8"S" in very usable condition that is not over priced and will undoubtedly continue to increase in Value.Excellent value at £79,950 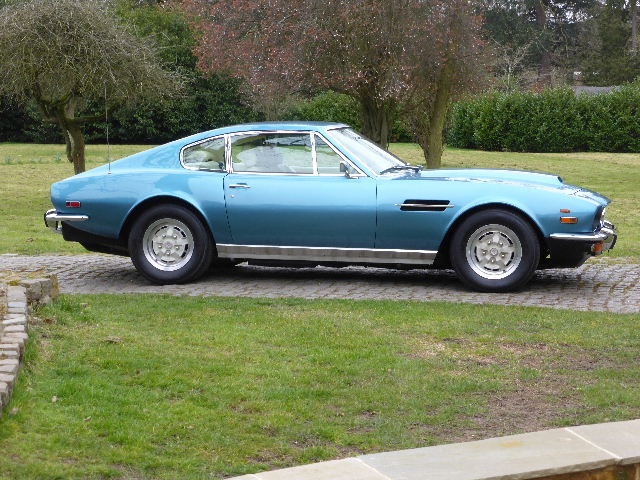 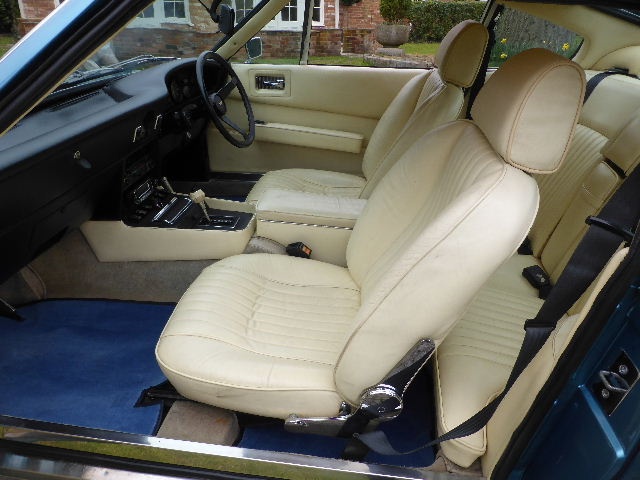 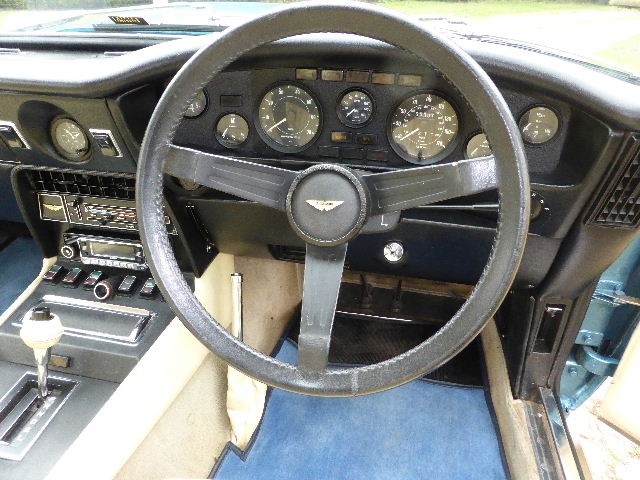