MERRY CHRISTMAS & A HAPPY NEW YEAR FROM US AT CLASSIC CHATTER

MERRY CHRISTMAS
&
A HAPPY NEW YEAR
FROM US AT
CLASSIC CHATTER

Posted by jeffharris at 09:58 No comments:

SANTA HAS TEAMED UP WITH DASHER, PRANCER
AND OUR OWN CLASSIC EXPERT IDRIS THE SQUIRREL
TO SELECT OUR CHRISTMAS CRACKERS FROM SOME OF
THE LEADING EUPOPES CLASSIC CAR DEALERS.
SO WHAT WOULD YOU LIKE FOR CHRISTMAS?

BROUGHT TO YOU BY:
CLASSIC CHATTER 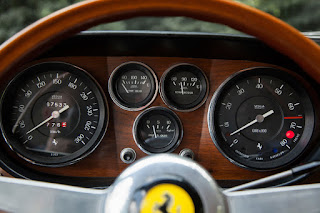 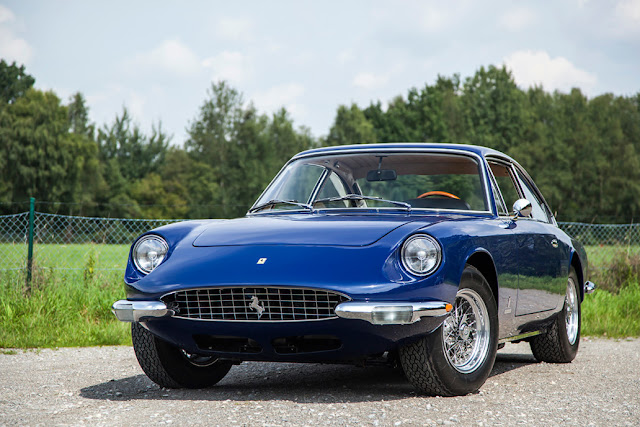 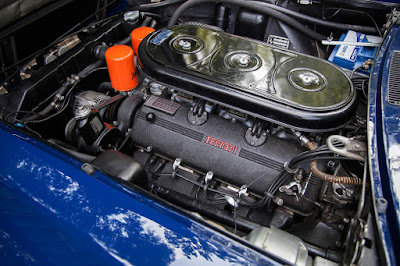 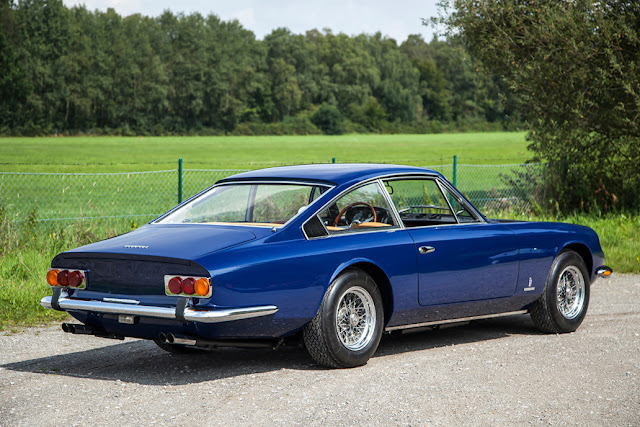 Posted by jeffharris at 20:14 No comments:

CAR BARN
Telephone - 01207 606 120
VIEWING BY APPOINTMENT
but please don't hesitate to get in touch if you need any further info. 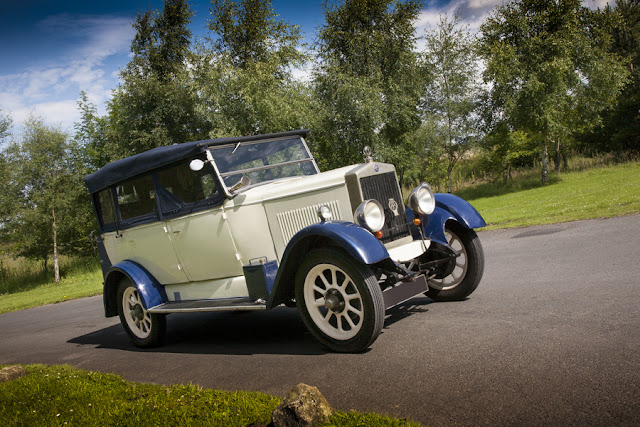 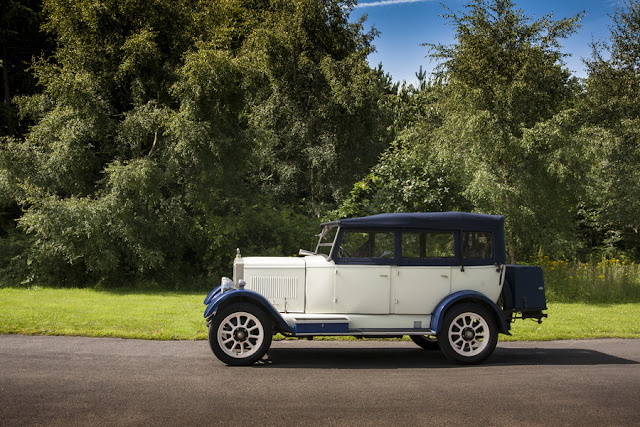 This lovely old 1927 Morris Oxford Flatnose has the most fascinating history. First delivered to Mr A J Hammond on 22nd June 1927 it was subsequently “sold for scrap” in 1964!Fortunately it was not broken up, but was in fact saved by a Mr Ralph Ferrie of Brownhills, Staffs. and some time later in 1973 it was “adopted” by the viewers of ATV Today, the nightly news programme. A total, televised, ground up restoration then ensued. It was even christened “Harriet” and introduced to the storyline of TV soap “Crossroads”The ATV restoration is included in the extensive history file in the form of the most incredible DVD. They even manage to interview one of the car’s early owners! 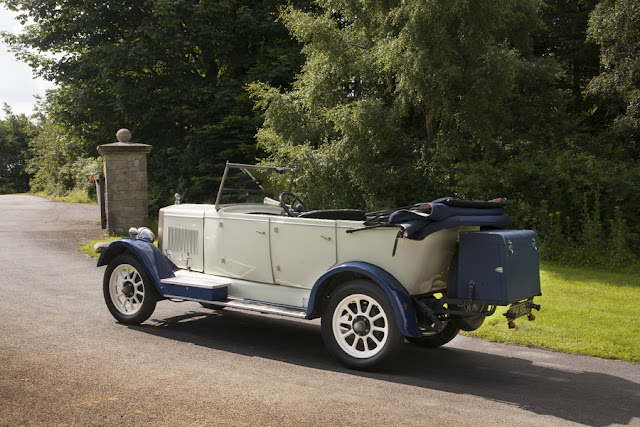 Posted by jeffharris at 16:30 No comments: 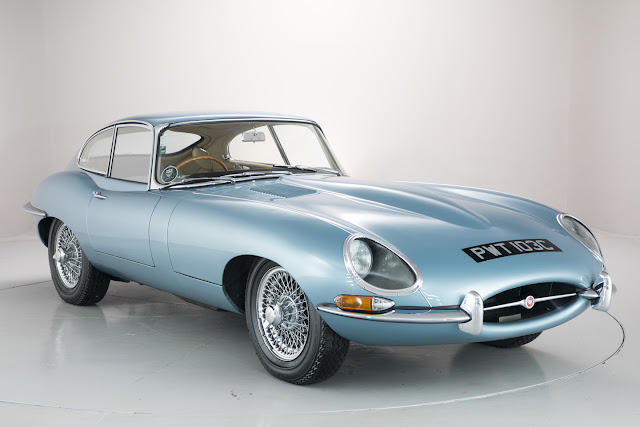 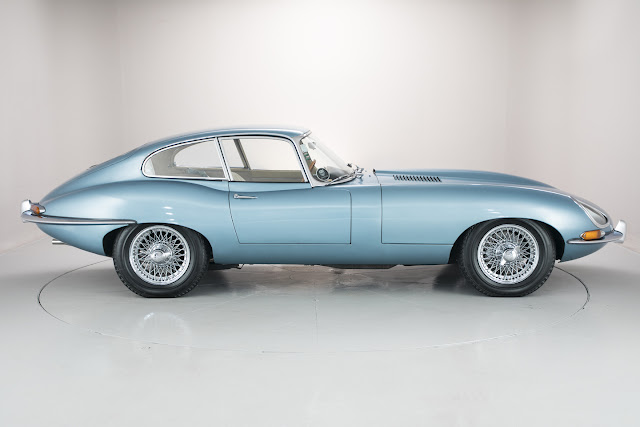 The Jaguar E-Type is a British automobile legend; manufactured by Jaguar between 1961 and 1975. It combined sensational looks, high performance and competitive pricing that instantly captured the imagination of the British public at the time and it has remained a truly iconic piece of British motoring history since. It was voted “the most beautiful car of all time” by the Daily Telegraph; Sports Car International Magazine placed the E Type at number one on their list of Top Sports Cars of the decade. On the cars public release in 1961, Enzo Ferrari called it “The most beautiful car ever made”
The Jaguar 3.8 Litre ‘E’ Type was introduced, initially for export only, in March 1961. The domestic market launch came four months later in July 1961. The cars at this time used the triple SU carburetted 3.8 Litre six-cylinder Jaguar XK engine from the XK150S. After that, the floors were dished to provide more leg room and the twin hood latches moved to inside the car. The 3.8 Litre engine was increased to 4.2 Litres in October 1964.
All E-Types featured independent coil spring rear suspension with torsion bar front ends, and four wheel disc brakes, in-board at the rear, all were power-assisted. Jaguar was one of the first vehicle manufacturers to equip cars with disc brakes as standard from the XK150 in 1958. The first series motorcars can be recognized by glass-covered headlights (up to 1967), small “mouth” opening at the front, signal lights and tail-lights above bumpers and exhaust tips under the number plate in the rear.
Our utterly unique Jaguar ‘E’ Type was supplied new via the factory authorized Jaguar Cars distributor for Christchurch, New Zealand Archibald’s Garage to Mr D. G Owen on the 11th of February 1966. We understand that the Jaguar resided in New Zealand until it was acquired by Hexagon Classics.
The Jaguar’s historical chassis file includes:
* Original Certificate of Registration (1966)
* Original Handbook Wallet
* Original Jaguar Operating, Maintenance & Service Handbook inc. Factory Amendments
* Original Maintenance Voucher Book
* Original Factory Warranty Certificate
* Original Jaguar Maintenance Chart
* Original Factory Tuning & Preparation Book
* Original Dealer Book & JDC Drivers Club Prospectus
* Original Factory Supplied Tool Roll (Complete)
* Original Factory Supplied Jack
The current total mileage of our outstanding Jaguar 4.2 Litre ‘E’ Type Fixed Head Coupe stands at, 10,513 m and surely represents a unique opportunity to purchase and own one of the most iconic, lowest mileage motorcars of the 20th century; a “Jaguar E Type Fixed Head Coupe” 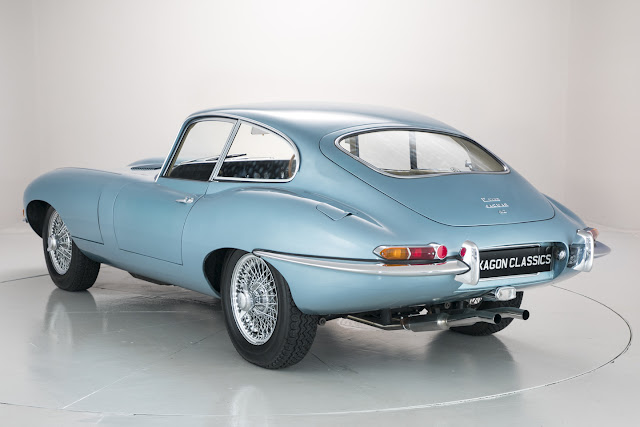 Posted by jeffharris at 15:52 No comments: 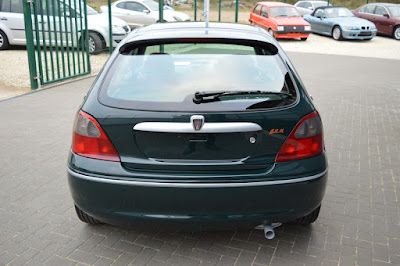 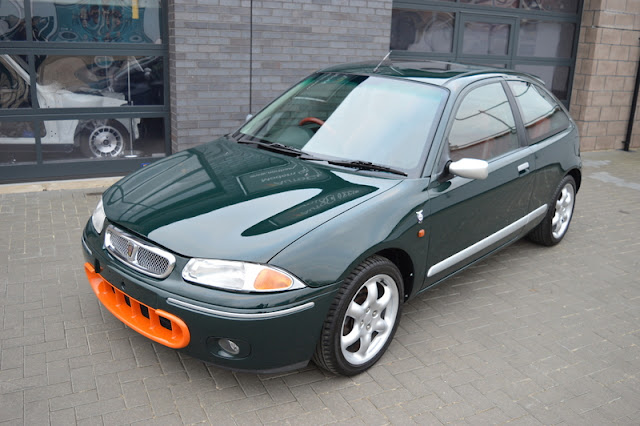 1999 Rover 200 BRM 58,000 miles British Racing Green with Red Leather FOR SALE: A no-expense-spared restoration has been carried out on this Rover 200 BRM and is now in new condition. This example has covered low mileage, complete with a full-service history, spare keys and original owner’s manuals.

EXTERIOR The British Racing Green exterior paint is in as new condition on this 200 BRM, as one would expect after an in-depth restoration. The paintwork is in beautiful order and has a glass-like shine and clarity throughout. There is no rust, blemishes or scratches. The common rust areas cannot be found in this example. All light lenses and trim retain a fresh appearance.

INTERIOR The Red Leather is in beautiful condition throughout, with minimal wear to be found. The carpet, trim, switches are in great condition. The dashboard and centre console are also in equally fine condition, with no cracks or sun damage to be found. The interior looks factory fresh and the carpets are in an unworn state. 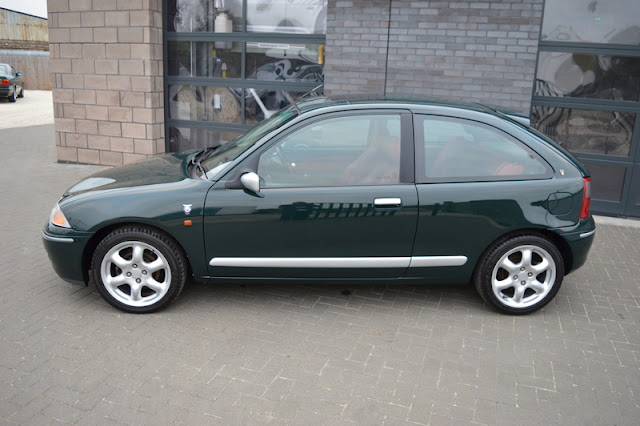 ENGINE & TRANSMISSION This 200 BRM is powered by Rover’s 1.8-litre engine, mated to a five-speed manual gearbox. This performs as it should do and the car drives wonderfully. The gearbox engages into each and every gear crisply. The engine is very quiet when idling and idles smoothly. The engine bay is completely original throughout and in great, clean order.

WHEELS, TYRES & BRAKES The 16-inch alloy wheels are in wonderful condition having just been refurbished and are shod in a set of Goodyear tyres all with good tread.
HISTORY This 200 BRM was first registered in October 1999 and has a full service history. The car comes with the original service book that is all stamped up, complete with various receipts. There are spare keys for the car and all the original owner’s manuals are present. Viewing is highly recommended for this example as you will struggle to find another example like this. This car is ready to be enjoyed on our roads. More photos can be found at the following page: pix.sfly.com/pqn_W4bi 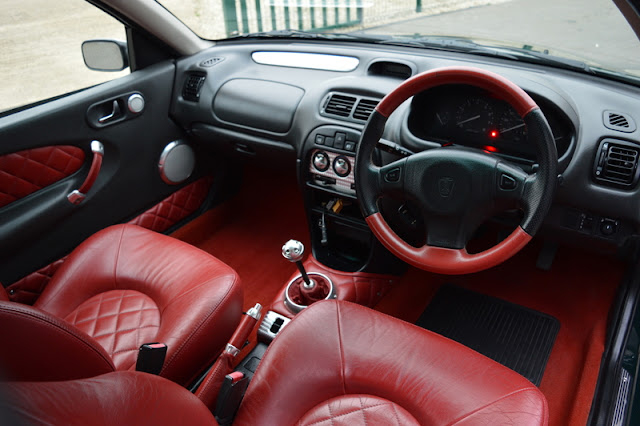 THE AUTO CLASSIC DIFFERENCE Unlike other classic specialists, here at AutoClassics, we don’t just simply go and buy any old car, clean it and put it up for sale at a lot more than the purchase price. The cars we source are carefully selected and we work on the cars to ensure they are the very best available so that the new owner can simply enjoy them and so that we at AutoClassics are satisfied that they are the best they can be. All our cars are: fully inspected and anything that is worn is replaced or repaired as needed, fully serviced before purchase, including cambelt where applicable, thoroughly cleaned and polished, sold with a fresh 12 month MOT and sold with 3 months parts and labour warranty. Cars can be delivered to your door by flatbed truck for £1 per mile. 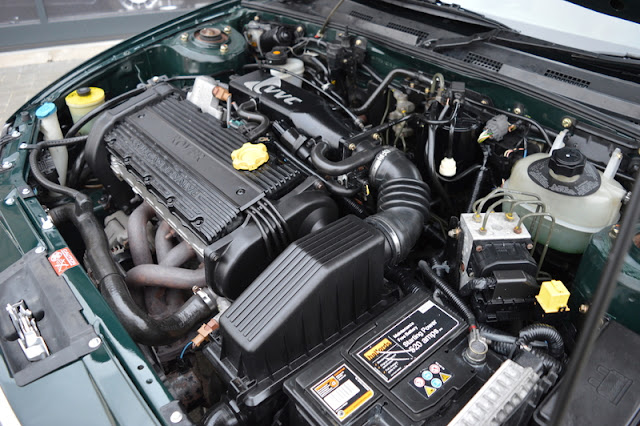 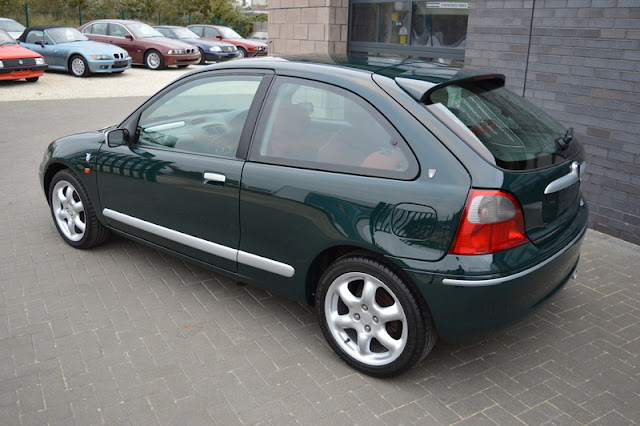 Posted by jeffharris at 14:13 No comments: 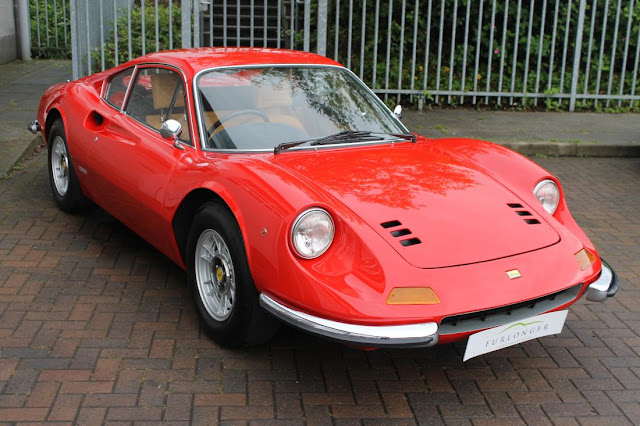 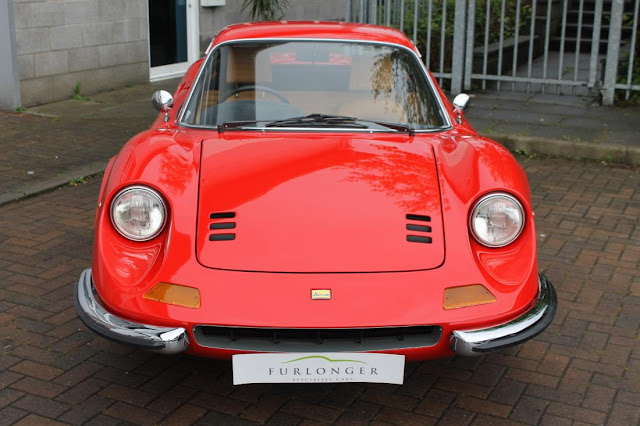 Chassis number 06062 was supplied by Maranello Sales of Egham, Surrey on 04/05/1973 where it was originally finished in Blue Metallic with Beige interior. One of 488 UK right-hand drive cars, it sold at its list price in 1973 for £5,485!
This matching number car example has an extensive history file stretching across its whole life, which with Dino’s is unusual. Split down into three extensive files, it holds all of the invoices, old MOT’s are present right back to its original sales invoice from Maranello. Also present are the original handbook, parts manual, warranty card, leather wallet, leather document wallet, tool kit, jack and spare wheel. It has now covered a document 53,000 miles. 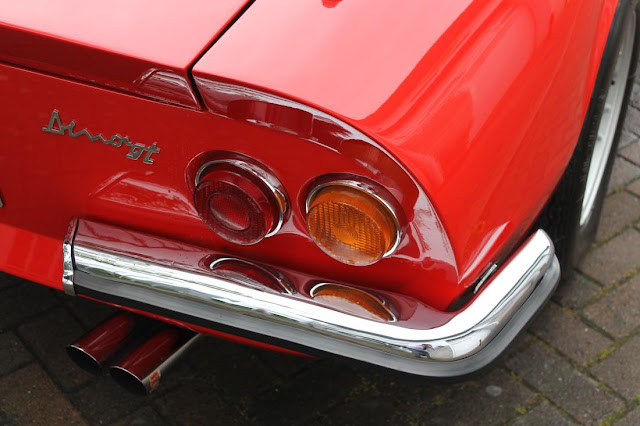 In the mid-1980’s the car was fully restored and colour changed to Rosso Corsa as most Dino’s where during this period. With values at this point at an all-time low, many enthusiasts felt they wanted to own an iconic Ferrari and of course wanted a red one! At the time many Dino 246's were restored on a budget with quite often engine swaps carried out quite commonly with Fiat Dino’s who shared the same 2.4 V6 engine. 06062, fortunately, didn’t suffer this fate and had a full nut and bolt restoration including the original engine being rebuilt.
Through the 1990’s the car stood in dry storage for many years covering few miles as its owner had a large collection of cars but as age was starting to catch up with him he decided to sell it on to a friend of his who lived Surrey.
In 2005 a good client of Furlonger purchased the car to keep with his other collection of Ferrari’s. At this time Darren Handley our now current Workshop manager was working for the owner as his private technician and undertook to remove the engine and gearbox to carry out a full rebuild of both. Also during this time, Darren took all of the suspension off to rebuild the shock absorbers, refit new bushes all round and re-powder coat all components. 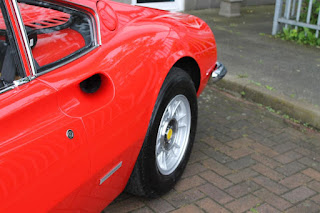 In 2013 the owner was selling one of his Ferrari race cars another gentleman who Furlonger have also dealt with in the past. This man then bought the race car and the Dino and kept it in his secure storage facility until 2014 when he part exchanged it with a Ferrari main dealer in London for a new Ferrari.
At this point, the Ferrari dealer undertook a full bare metal repaint in Rosso Corsa. The work was carried out by Ambassador coachworks of Woking, Surrey. The car was left in primer for 3 months before being painted in the colour and lacquered to make sure no sinkage had occurred.
Also as it was fully stripped down, all of the chrome was re-plated and refinished before being fitted back to the car. 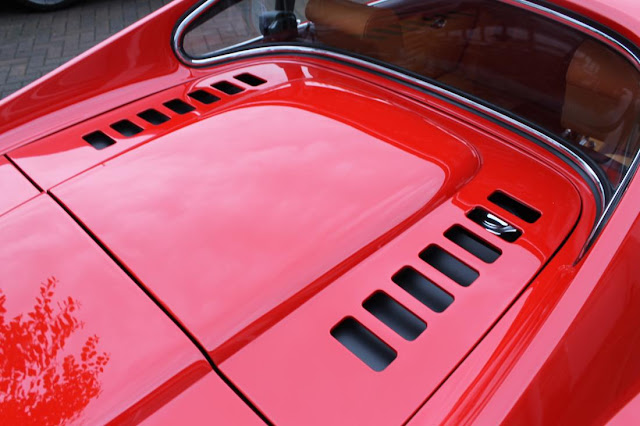 While the car was at the body shop it made sense to have the interior fully re-trimmed. Everything was removed and sent to Lupi in Italy a World renowned Ferrari leather trimmer. Many of the original patterns and tools are still used at Lupi make the interiors as close to Ferrari factory finish as per the 70’s.
06062 was then sold to the most current owner who has cherished the car, kept in his heated garage in Surrey. It was delivered to us on the 22nd of August on which we fully inspected the car in our workshop.
Overall this Dino 246 GT is a matching number, well-documented example complete with everything it was delivered with new, fully restored and in superb condition. A great future investment and with Ferrari’s 70th anniversary and Enzo’s 40th anniversary of his passing in 2017 a car named after the great man’s son is sure to be sought after.
For all enquiries please call 01233 646328.
The Dino family of cars was named after Enzo's son who played a large role in the development of the V6 drivetrain. The Dino 206 GT was the first road-going Ferrari to adopt the V6 which previously, had been exclusive to racing models. The 206 GT was an alloy-bodied coupe that was first seen on the market in 1968.
206GT production was low. Just one year after the 206 release, it was replaced with the revised 246 GT. The new 246 was a heavier car, thanks to the inclusion of Fiat's cast-iron V6, which increased the capacity to 2418cc. The engine was the same as that used in the Fiat Dino. This is one of the first times a mass-produced engine was used in a Ferrari. Compared to the Ferrari V6, the Fiat power plant had been cast in iron rather than aluminium alloy.Also changed to steel was the bodywork. Between the two models, the styling remained almost identical except the 246 had pressed steel panels instead of the alloy body found on the 206. 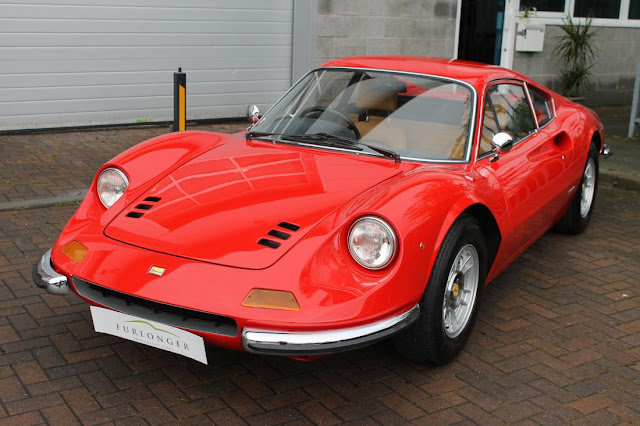 Posted by jeffharris at 21:26 No comments: