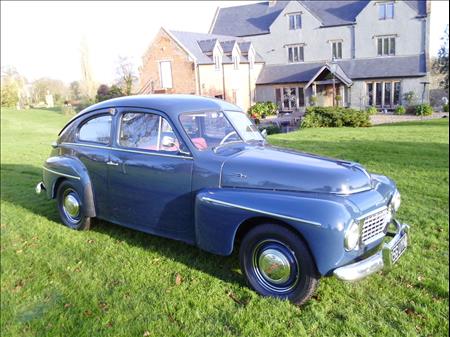 First registered in1956 to a family in the south of France who eventually sold the car to a dealer in Italy in 2010. The car has only covered 24,500 miles from new, this must be one of the lowest mileage examples on the market. Finished in Blue (original colour) with two tone cloth upholstery and the original rubber flooring. Fitted with its original 1400cc volvo engine it is capable of cruising at a comfortable 60+ miles per hour!The car is totally rust free having spent all of its life in the warm climates of Southern France and Italy. History includes original sales invoice and receipts. This would be a good car for European touring having the comfort, reliability and safety of a Volvo. £8750 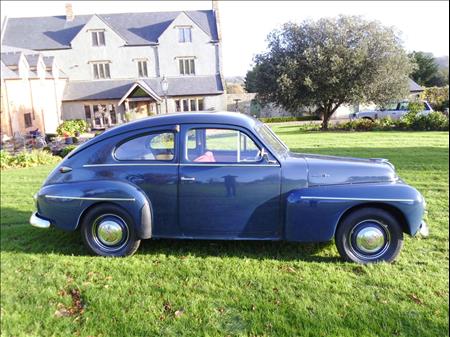 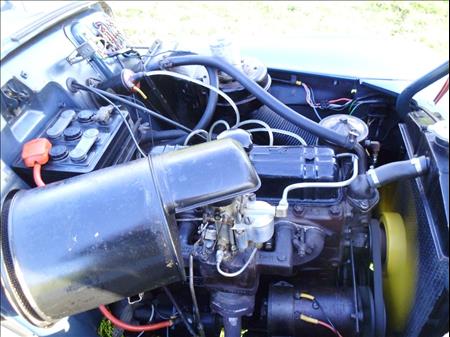 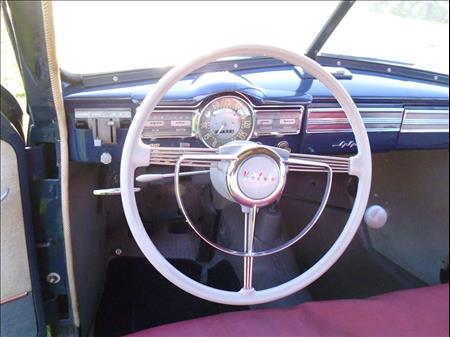 Posted by jeffharris at 10:52 No comments: 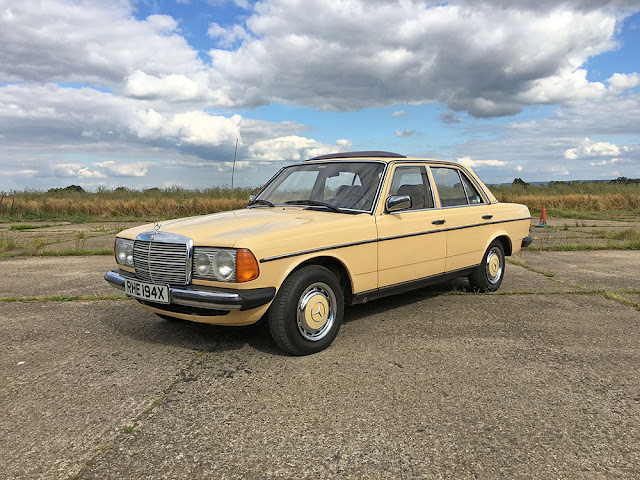 Occasionally you find an old Mercedes that has a great tale to tell and tremendous charm. Of course it’s fantastic to find those tiny mile timewarp cars, but there’s something about a car like this Manila Beige W123 – a well-travelled faithful friend to one man, it’s sole owner for 34 years. Bought to be used and used every day. Cars like this are a testament to the quality of Mercedes-Benz, they represent the antithesis of today’s throwaway culture; a beautifully made machine beautifully looked after is capable of extraordinary longevity.
Back in 1982 Mick McMichael (Google him) was taking the next step in his professional wrestling career. A successful career that started early with him being the youngest pro the sport had seen. Coaching naturally followed, and with a great deal of the work taking him to Germany a reliable car was needed. Mick considered a Cortina but was persuaded by his friend Joachim, a Bremen taxi driver, that he needed a Mercedes, and that he could get him a W123 saloon much cheaper than the inflated prices dealers in the UK were charging, but it would have to be left-hand drive. Convinced, Mick took the plunge and ordered the Manila Beige 240D, with a few accessories, such as the genuine Mercedes tow bar, power steering and a sunroof. We have all the original order documentation and bill of sale from the Bremen Mercedes concessionaires. He never needed to buy another car…
Travelling all over Europe every year, usually for eight months at a time, towing their caravan, Mick and his wife toured Europe throughout the eighties and nineties. The Berlin wall fell, Europe changed but Mick’s trusty Mercedes kept on covering the kilometres.
The service history of this car is quite incredible. The original service book has around sixty entries up until 2006, detailing every piece of work done to the car and endless oil changes. In 2006 a new engine was fitted – a reconditioned unit from Mercedes specialists, Crewe Engines – after which a new notebook was started (there was no space left in the original service book) detailing every journey and every service since. It would appear that around 22k miles has been covered on the new engine. We have just fitted a new radiator and serviced the car yet again.
Thanks to always being looked after and garaged the bodywork is in remarkable condition. The fabulously period Manila Beige paintwork still shines deeply. There are a few minor blemishes, but we rather think that, along with the various old stickers, they add to the charm of this car – patina in its truest sense. Importantly the underside is very good with original unwelded sills and floors.
Inside we have left the sheepskin tailored seat covers that were fitted when the car was new. They’re getting a bit threadbare in places but we feel they’re part of the car. The carpets are unmarked thanks to the protection of rubber mats and the original Grundig stereo works well.
The 240D with a manual gearbox was the archetypal taxi of Berlin to Beirut. And today, even at three or four decades old still has no replacement in North Africa, the Middle East and beyond.
Turn the key and the four-cylinder diesel catches instantly and settles down to that unmistakable clatter that takes you back to long-forgotten Mediterranean holidays. Progress is never hurried, but not too leisurely. The gearbox is tight with superb synchromesh, the ride wonderfully forgiving and the brakes superb. It’s the sort of car you would think nothing of driving to the next continent in, right now.
All books/manuals, tools and spare keys, original bill of sale and a small cache of spare parts. Recently passed its MoT and ready to drive and enjoy.
A wonderful old thing that needs a new owner who’s prepared to use it, love it and look after it as well as it has become accustomed. 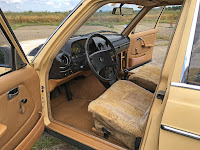 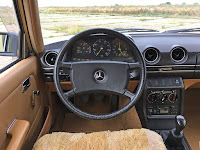 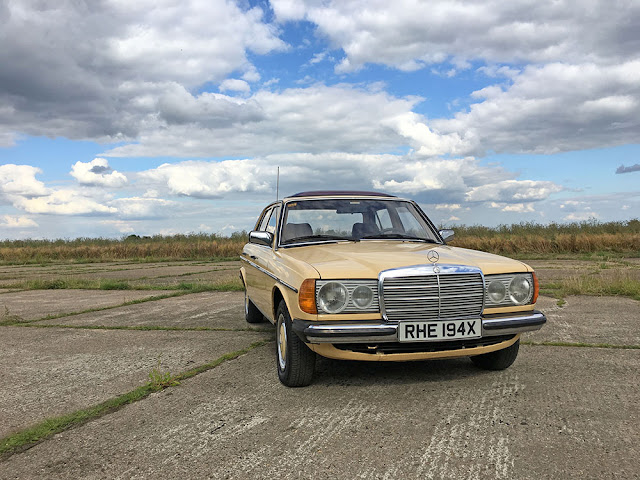 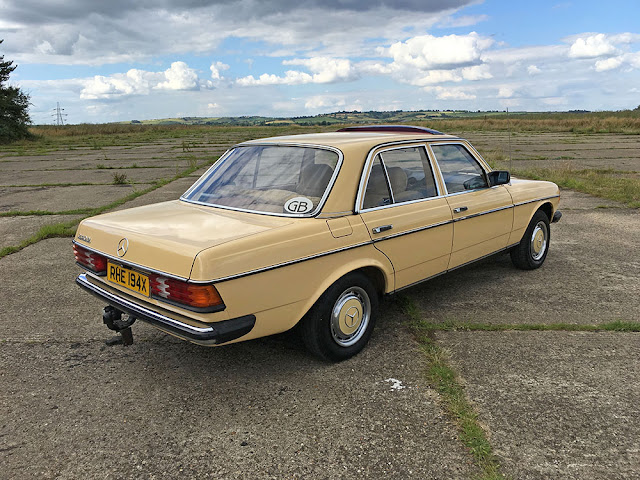 Posted by jeffharris at 22:20 No comments: 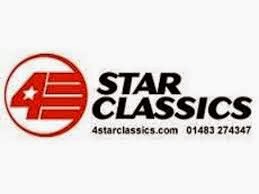 The Renault 5 Turbo was a high-performance hatchback launched by the French manufacturer at the Brussels Motor Show in January 1980.

Seven years after winning the World Rally Championship in 1973, Renault introduced the new R5 Turbo as a pure homologation special to compete in Group 3 and 4 racing and international rally competition. In response to Lancia's rallying success with the mid-engined Stratos, Renault's Jean Terramorsi, vice-president of production, asked Bertone's Marc Deschamps to design a new sports version of the Renault 5 Alpine supermini. The distinctive new rear bodywork was styled by Marcello Gandini at Bertone. Although the standard Renault 5 had a front-mounted engine, the 5 Turbo featured a mid-mounted 1397cc Cléon-Fonte turbocharged engine placed behind the driver mid-body, in a modified Renault 5 chassis. In standard form, the engine developed 158hp and 163 lb ft of torque.

Though it used a modified body from a standard Renault 5 and was badged a Renault 5, the mechanicals were radically different, the most obvious difference being rear-wheel drive and the mid-engine placement. At the time of its launch it was the most powerful production French car. Renault's initial plan was to produce just 400 road-going examples, the minimum needed for homologation purposes. When the car was revealed to the public at the 1980 Brussels Motor Show, however, Renault was surprised to see the level of customer interest in its narrowly-focused race car for the street.

In the car's first three production years, the Dieppe, France, Alpine factory produced 1,690 R5 Turbos, though it isn't clear how many examples wound up wearing registration plates instead of competition numbers. Official documentation from Renault states that 802 ‘Turbo 1s' were built in 1980, 536 in 1981, and a further 352 were built in 1982.

The audacious exterior of this rare eighties super-hatch is finished in bright red with the correctly contrasting bumpers. The bodywork remains to a very presentable standard with the satin trim appearing as new throughout. Manufactured in early 1981 this R5 is number 869 of less than 1,700 ‘Turbo 1s' produced over just three years.

The Bertone-styled cabin remains in very good order. The seats present extremely well with minimal signs of use, and the carpets throughout are brand new. The dash and fascia are also in great condition and present with a marvelous original finish. The door cards, steering wheel, and gearshift gaiter are not the factory standard although correct items are still manufactured by a specialist company in France.

The centrally mounted 1397cc unit in the Turbo was derived from the Renault 5 Alpine hot hatch, known as the Gordini in the UK. Using a modified Lancia Stratos as a testbed, Renault began work on increasing the engine's output from a normally aspirated 93hp to a turbocharged 158hp; the result is what you see here.

Neatly enclosed behind the front seats and hidden away by the freshly carpeted panels the engine itself appears in fine order and was most recently serviced in August 2015 at 72,344km.

The Turbo sits on original alloys in grey. They each present extremely well with absolutely no curb marking or milking beneath the lacquer to speak of. They are shod in a matching set of period Michelin TRX tyres with plenty of tread remaining.

The Renault was first registered on 20th July 1981. It was imported into the UK from Switzerland in 2015 and has since been MOT'd and UK registered. Present in the history file are the V5C and MOT certificate, plus maintenance records dating from 1998. The service history is as follows:

Posted by jeffharris at 12:51 No comments: