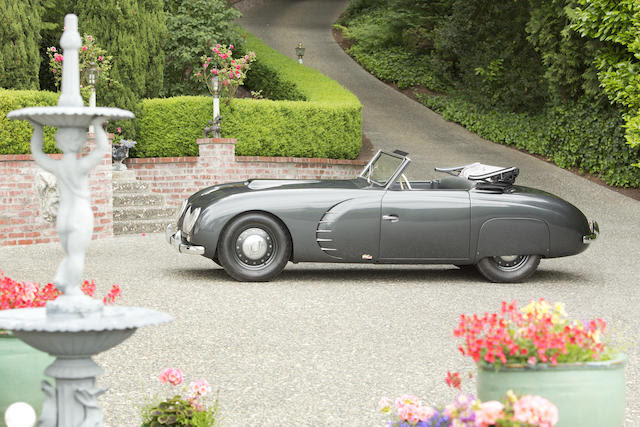 THE VERITAS SCORPIONOf Veritas, automotive journalist Jerry Sloniger would write in Volume 14, Issue 1, of Automobile Quarterly, "In its short but scintillating day, (it) was not only the fastest special around, but quite simply the sports car to have." Veritas-Arbeitsgemeinschaft für Sport und Rennwagenbau (Veritas-Joint Venture for the Construction of Sport and Racing Vehicles) was launched in March of 1947 in the village of Hausen am Andelsbach, near Hockenheim. Its principals were Ernst Loof, the former head of BMW's racing division when the BMW won the Mille Miglia in 1940; long-time sales manager Lorenz Dietrich; and former BMW motorcycle champion and pre-war Auto Union Grand Prix racing driver Georg "Schorsh" Meier. Their goal was to build a new sports and racing car to succeed the hugely-successful pre-war BMW 328. It was an idea they'd been discussing all through WWII. Their first prototype racer was built in a corner of BMW's Allach factory, which was being used for Vehicle maintenance by the allies. Disallowed from building any sort of new car or engine in the American Zone of Occupation, the project moved to the French zone, and the team concentrated on what it knew best, the Type 328, with its unique overhead-valve six. Using its own lightweight steel tubular frames and used 328 engines supplied by its customer, the new racers came together. The new cars were named Veritas-BMW, the first portion of which was taken from the name of the Roman god of truth. The light alloy body, fabricated by Kurt Frick, carried a close resemblance to BMW's pre-war racing cars, which boasted excellent aerodynamics. With this car, Karl Kling won multiple German two-liter championships. About 22 Veritas RS were built, using modified 328 engines. They compiled an excellent competition record. In 1948, the company relocated to Meßkirch in Baden and re-incorporated as Veritas Badische Automobilwerke GmbH. Desirous of building a road car, Veritas introduced the Comet in 1949, followed by a two-seat convertible with the interesting name of Scorpion, and then the Saturn – a coupe with three-abreast seating. In late 1949 a single-seat F2 racer called the Meteor appeared. The Scorpion and Saturn were both built on a 2600mm wheelbase, and featured fully-independent front suspension with upper and lower control arms, longitudinal torsion bars, and telescopic shock absorbers. The rear drive and suspension comprised a deDion axle with triangular links, longitudinal torsion bars, and telescopic shock absorbers. Steering was by rack-and-pinion. Brakes were four wheel hydraulic drums. The engine was a BMW 328 of 1988 cc with overhead valves operated by a quite effective system of transverse rocker arms that gave the motor the appearance of having overhead cams. The five-speed transmission was of the company's own design. Electrics were 12-volt, unusual for the day.Veritas contracted with Karosseriebau Spohn of Ravensburg to clothe these chassis. Spohn had built elegant auto bodies for such prestigious chassis as Bugatti, Steyr, Mercedes Benz, and Maybach through the 1920s and 1930s. However, compared to some of the coachwork that emerged from Spohn in the late 1940s and early 1950s, the Veritas Scorpion and Saturn would have to be described as mainstream and conservative. Spohn was something of a visionary, even if those visions were sometimes borrowed, such as those taken from General Motors' daring concept cars of the same era. Spohn was especially entranced with the huge, squared-off tailfins first seen on GM's Buick LeSabre show car of 1951, and incorporated those fins into his C90, a rather bizarrely-styled sports car. Spohn specialized in customizing the rather mundane post-war Buicks, Fords, and Pontiacs often driven by US military personnel stationed in Germany. Many of those also wound up with outsized tail fins. Spohn continued its adventurous ways, including construction of Germany's first post-war fiberglass-bodied cars, until it closed its doors in the late 1950s.

After several reorganizations, Ernst Loof moved the remains of Veritas to the Nurbürgring and produced a small number of expensive cars of the same name, but funding had dried up for the perpetually-undercapitalized concern. By In 1953 the firm was absorbed by BMW, the company that had spawned it. Best estimates are that Veritas produced no more than 78 cars in all.

THE MOTORCAR OFFEREDThis lovely Veritas Scorpion Convertible is believed to be one of only two examples of its type in the United States; a few more may exist in Europe. Based on registration certificates supplied with the car, its earliest American owner appears to have been a Mr. James Shipman of Seattle, Washington, circa 1963. A few years later it was purchased by Mr. Fred Kuney, also of the Seattle area. It then came into the possession of Burt Laborette of Lake Sammamish, Washington. In 1974 it was acquired by the current owner during a visit to the Laborette collection. The car, he recalls, was complete although disassembled and in poor condition. The current owner was struck by its beautiful lines and advanced engineering and purchased it on the spot. The Veritas was stored in a barn for many years while the new owner completed construction of a new house, but a comprehensive restoration finally began in 1989. The car was handed over to Greg Soter at Phantom Restoration of Seattle, where the body shell was separated from the tubular steel frame to which it had been welded, and both were carefully stripped. Soter remembers that most of the steel inner structure such as the floors and front and rear bulkheads had to be refabricated from scratch, using the original metal as a pattern. The BMW 328 engine, transmission, rear axle, and brakes were all rebuilt, and the body was repainted in a striking Gunmetal Gray before reassembly. The interior was reupholstered in dark gray leather. The carpeting is gray with a leather pad beneath the driver's feet. The black German canvas top is lined and padded. A new wiring harness of correct materials was made up, and the beautiful instruments by OK Isgus of Frankfurt am Main were rebuilt. The center-lock steel disc wheels were refinished and fitted, after a lengthy search for the correct size, with new Michelin 16-inch tires. Upon completion of the car's restoration, it was invited to appear at the 1992 Pebble Beach Concours d'Elegance, where it was awarded a third-place in class trophy.The Veritas Scorpion is supplied with a correct spare wheel and tool roll, an extremely rare copy of an English-language factory advertising and specification brochure, an album of more than a thousand photographs taken during the restoration, and the original restoration invoices.Today, this magnificent example of post-war German design and coachwork displays the patina of several decades of use following its restoration. Some of its brightwork is scratched and could benefit from replating, but very little effort would be required to bring this fine automobile back to show-worthy condition 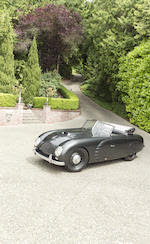 
The 18th annual Bonhams Quail Lodge Auction will be an historic event in auction history. Scheduled for Friday, the 14th of August, during the famous Monterey Peninsula / Pebble Beach Car Week, Bonhams Quail Lodge Auction in Carmel, California, boasts another remarkable line-up of automobiles, particularly of sports and racing cars, and more than a dozen examples from Ferrari.
As always, Bonhams is pleased to hold its 18th annual Quail Lodge Auction in conjunction with
The Quail, A Motorsports Gathering 2015. Malcolm Barber, Bonhams Co-Chairman, adds, "it's been a pleasure to partner with The Quail: A Motorsports Gathering, one of the world's premier collector car events, and bring a truly blue chip selection of motorcars to Carmel."


Please note that Bonhams' preview and auction does not require a ticket to The Quail, A Motorsports Gathering.

Please Note:
The final bid (hammer) price of each lot will be subject to a buyer's premium. For MOTOR VEHICLE property the premium is 10% of the hammer price.
Posted by jeffharris at 09:42