CLASSIC OF THE DAY
Featuring

The following vehicle comes up for sale at Bonhams Quail Lodge auction later this month, but i think you will agree it's a bit off the wall 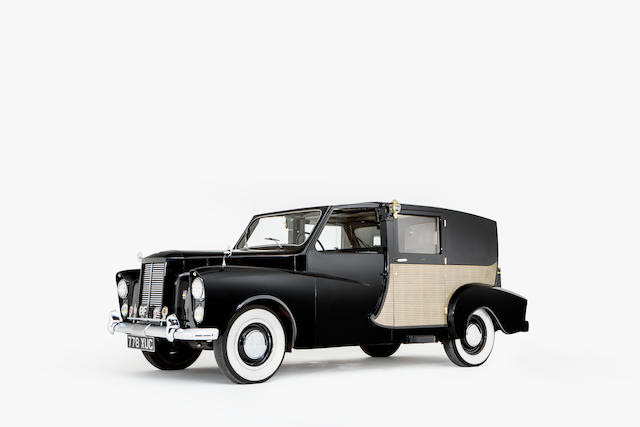 Ford OHV Inline 6-Cylinder Engine
Single CarburetorApproximately 100bhp at 5,000rpm4-Speed Manual TransmissionFront Independent Suspension – Live Rear Axle4-Wheel Drum Brakes*Custom coachbuilt luxury Brougham
*Ordered and used by business magnate and socialite Nubar Gulbenkian
*Elegant custom coachwork by FLM Panelcraft
*Delivered new by Jack Barkclay
*Believed to be the only example in existenceNUBAR GULBENKIAN(1896 – 1972)"I wanted my taxi dolled-up, more comfortable inside and more distinguished outside, without losing its mobility. People recognize it. After a party or an opening they come and tell me where it is and I don't have to wait."So said the wonderfully eccentric Nubar Gulbenkian, the Turkish-born Armenian born into immense wealth who spent the major part of his life enjoying that privilege. As the noted Time magazine said in their January 24, 1972 article entitled 'Last of the Big Spenders', "Gulbenkian's long beard, monocle and the orchid in his buttonhole which was replaced daily led to him becoming noted for a fairly eccentric life, with a number of stories building up around his name. Indeed his character was summed up by an associate who claimed that 'Nubar is so tough that every day he tires out three stockbrokers, three horses and three women'".The son of Calouste Gulbenkian, a rich Armenian oil baron who became known as 'Mr Five Percent' through his habit of retaining that amount of the shares of the oil companies he developed, he became a true Anglophile, having been educated at the exclusive Harrow School and then Cambridge University. Nubar was rarely out of the social columns and he had a passion for fast and expensive cars. Jack Barclay's London Rolls-Royce showrooms in fashionable Mayfair were just a stone's throw from his London home, the Ritz Hotel on Piccadilly of course. In post-war years he ordered several Rolls-Royce motorcars, notably upsetting Rolls-Royce with the extraordinary Hooper & Co. coachwork he commissioned on a Silver Wraith, known as The Pantechnicon. Following a succession of Rolls-Royce motorcars Gulbenkian was to choose as his London transport an Austin FX4 Taxi as he was later famously quoted,"because it turns on a sixpence whatever that is".THE MOTORCAR OFFEREDIt was no ordinary black cab London taxi as, through Jack Barclay & Co, he commissioned FML Panelcraft to construct coachwork to his own design. It has been said that Gulbenkian had as many as three of these bespoke taxis built and this is believed to be second. There is a story that Gulbenkian's friend Paul Mellon (from the wealthy American banking family and, like Gulbenkian, a Cambridge graduate with a passion for race horses), was staying at The Ritz Hotel and saw Gulbenkian's taxi and wanted to buy it. Gulbenkian refused to sell it but told him he would commission another and sell him that one. There is no evidence to substantiate this story but this car is now to left hand drive specification and has subsequently been equipped with a Ford six-cylinder motor and gearbox. It had all the extravagant style of Gulbenkian's other car with only minor differences in detail, including the stacked front lighting cluster. To further add to the mystery the car at some time appears to have a Swedish connection for the badge bar has a Swedish Club badge and an enamelled Swedish 'Sverige' flag inset on the nose beside the radiator grill. The vehicle is smartly presented in black livery with 'wickerwork' panelling. Courtesy steps either side allow easy access and silk door pulls, courtesy lights and vanity units complete the opulent interior. There is a clear glass panel above the passengers' heads and two occasional seats enable as many as five persons to travel in the rear. This left hand drive bespoke Sedanca Brougham is fully operational and has come from the UK to be sold at Quail Lodge. It is offered with copy UK registration documents and a certificate of roadworthiness that expired just a couple of months ago. June 2015. The file also includes Pantaraxia, a first edition of Gulbenkian's autobiography published in 1965; and two magazines that feature articles on Gulbenkian (Life, October 1965 andTime, January 1972).With interest in taxis currently at exceptional levels here surely is one of the most distinctive and eccentric examples one can imagine, with that famous Gulbenkian styling and provenance