FERRARI FRIDAY
OUR SELECTION TODAY CAN BE FOUND AT 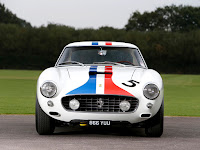 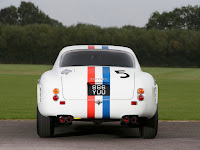 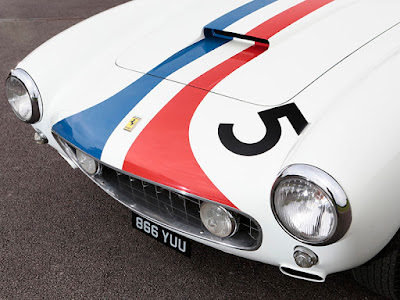 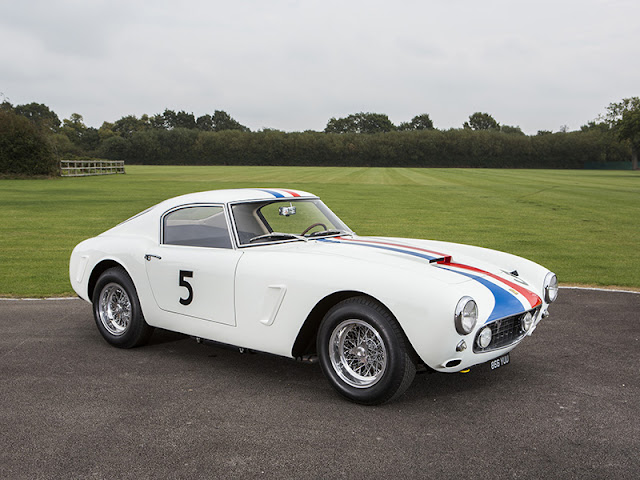 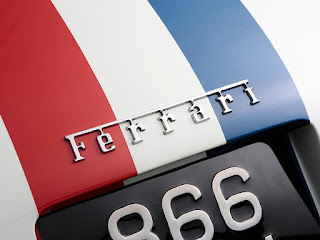 - A rare early alloy-bodied SWB 250 GT
- Jo Schlesser and André Simon finished third overall in its first race – the 1000 kms of Montlhéry on October 23, 1960
- Total and correct restoration to its original configuration by the Ferrari Maranello Factory in the period May 2007 – May 2008
- Issued a “Certificato Di Authenticia” by Ferrari/Classiche; “Red Book,” compact disc detailing the restoration and a Classiche metal badge 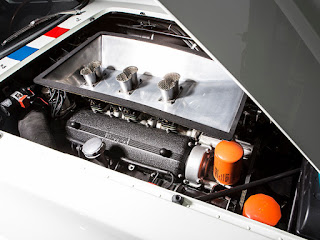 FERRARI’S SHORT WHEELBASE BERLINETTA – 1960-1962
After much competition success with their long wheelbase Berlinettas in the Grand Touring category from 1956 to 1959, Ferrari engineers Bizzarini, Chiti and Forghieri designed the replacement, the SWB Berlinetta, with the prototype chassis, no. 1539 GT, being introduced at the Paris Auto Salon in October 1959. In addition to the new wheelbase, improved three-liter Colombo V-12 engine and sensuous body work by Pininfarina, the new GT also featured the marque’s first use of disc brakes, in this case, supplied by Dunlop. Ferrari’s alloy Berlinetta stole the show, prompting a long lineup of frustrated enthusiasts who were not offered delivery dates unless their names were known in the world of racing! (For them, however, a new heavier steel-bodied “Lusso” version with milder performance and offering more road-ability would soon be introduced.) 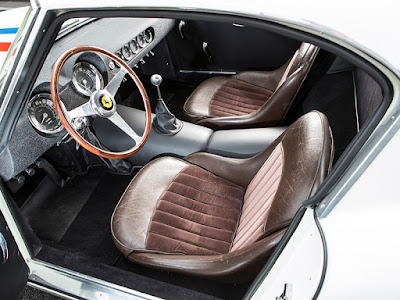 In both versions, “Lusso” and “Competizioni,” Ferrari constructed less than 200 SWB Berlinettas in total, these being built to three or four different specifications as to their external details – window configurations, marker lamp locations, body vents, etc. Also, one must remember that since these cars were totally hand-fabricated, in reality, each SWB Berlinetta, while similar in appearance, is totally unique! Aesthetically they are unmistakably Ferraris – aerodynamic and devoid of superfluous bulk or embellishment with minimal overhangs and body corners wrapped around the polished Borranis. The general appearance of these fastback projectiles speaks of power and purpose.
The SWB Berlinetta’s list of competition success is too long to catalog in detail, but worthy of mention are GT category wins at Le Mans and every other FIA-sanctioned major European, UK and US venue in 1960 and 1961 as well as Tour de France victories in 1960, 1961 and 1962 and, of course, Stirling Moss’s Tourist Trophy wins at the wheel of Rob Walker’s SWB in 1960 and 1961. In reality, the Scaglietti-built SWB is Ferrari’s last true dual purpose GT – a car that was driven by its owner to the circuit, had its luggage removed and race numbers applied and were then raced and collected trophies before the girlfriend and bags were reinstalled and driven back home. Bellissimo! 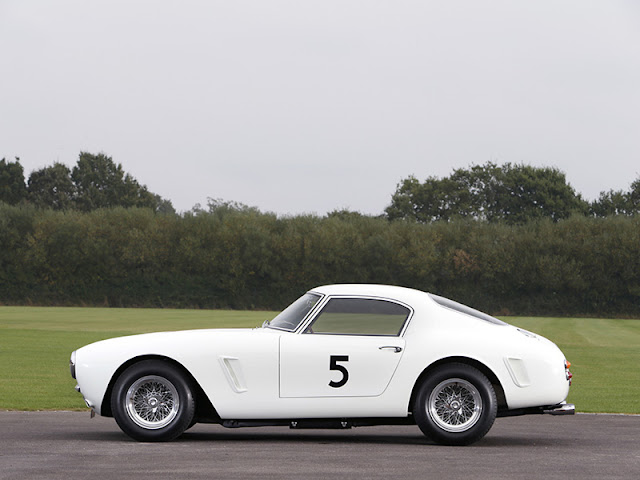 FERRARI 250 GT SWB BERLINETTA GT NO. 2209 GT – TRIUMPH AND TRIBULATION
According to Jess Pourret’s book, The 250 GT Competition Cars, only 42 alloy competition Berlinettas were built in 1960, with chassis no. 2209 GT being the 4th from last of these.
Like most competition Ferraris, no. 2209 GT has endured a chequered history – literally. Sold new to Ardilio Tavoni of Modena on October 18, 1960, this car was registered on Modena plates MO 60578. According to Marcel Massini’s research, Tavoni was likely an agent/factory mechanic acting on behalf of up-and-coming racing driver Jo Schlesser, a man known for his exuberant “on the ragged edge” driving style. Indeed just four days after delivery, Schlesser, partnered by André Simon, finished a very respectable third overall as Car # 5 in the French 1000 km's of Montlhéry. 1st and 2nd fell to the Gendebien/Bianchi and Mairesse/Von Trips SWB GT with some 20-plus Ferraris, Aston Martin GT and Porsches trailing behind Schlesser and Simon.
Next up was March 12, 1961, Monza “Coppa Saint’Ambroeus” with Sandro Zafferi at the wheel and the car numbered as # 197. On November 4 & 5, 1961, this SWB placed 4th in the GT Class at the Tour de Corse driven by Jo Schlesser and his wife.
Tavoni sold our SWB to its second owner Gianni Roghi of Milan for Italian lire 740,000 on November 2, 1962. On February 18, 1963, Roghi had the Ferrari serviced by the factory Assistenza Clienti in Modena. Later, on June 2, 1963, Roghi placed 3rd in class at the XXV Coppa della Consuma Hillclimb. Roghi continued his competitions in 1963 with good results at the Coppa Pisa, the Monza Coppa Inter-Europa and the Coppa Cittá d’Asagio.
On January 19, 1967, Roghi sold no. 2209 GT to its third owner, Tullio Lombardo, who passed it to the fourth owner, Gastone Crepaldi, both residents of Milan. (Crepaldi paid Italian lire 500,000 for the seven-year-old used car.) In 1968 Carrozzeria Piero Drogo of Modena re-bodied the car to a design by Tadini; the original engine was changed to a 250 GTE engine numbered 4291. On May 29, 1969, a Miss Maryvoure Lassus of St Vile, France purchased the refurbished car. On February 18, 1971, it was acquired by the next owner Eric Russli Birchler of Paris, France who in turn sold it to Beruard Cros-Lafage at an unknown date. Then sometime in 1978 it was either “stolen” or sold by a garagiste for a repair or storage bill owed – depending on whose history account one reads. In any case, UK resident Stuart Passey purchased no. 2209 GT from dealer Michael Lavers after the French police and the UK Fine Arts team determined that the “theft” matter was resolved, allowing Mr Passey to obtain a clear title of ownership (1979).
Now in England, Mr Passey had the 250 GT registered on UK plates “SWB 70” before commissioning a total restoration by DK Engineering, including a 1961 type SWB body built by Grand Prix Metalcraft of London and painting to its original white with a green stripe. (Schlesser’s competition colours of Madagascar.) In the summer of 1984, Passey displayed the car at the Donnington Park Ferrari Owners Club meeting. Passey, a passionate Ferrari enthusiast, was to care for no. 2209 GT for more than two decades while driving and displaying the car in various UK-based events, including the Coys Historic Festival in 2001.
In January 2003, the car was sold b 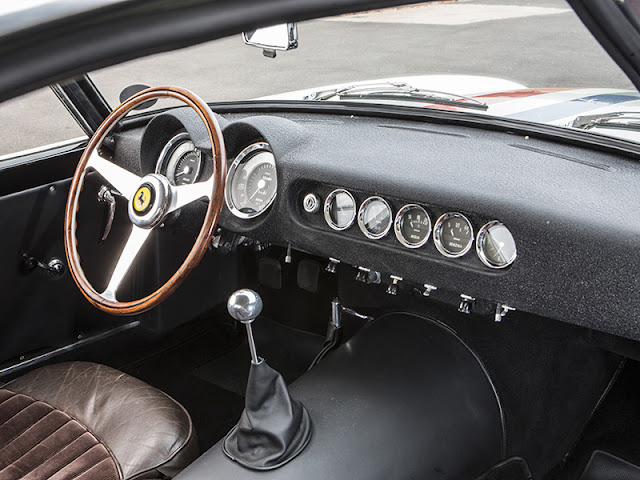