Our classic of the day is available from Mathewsons 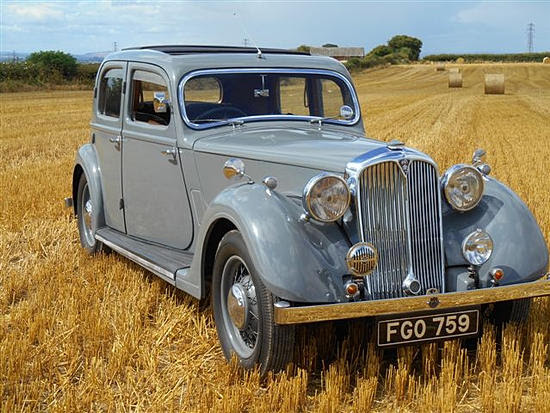 The new 12 was launched in 1934 and was part of the new range introduced by the Wilks brothers. It had a new 1496 cc, four-cylinder engine producing 53 bhp. The chassis was also new but based on the one seen on the 1933 Speed Pilot and was "underslung" going under the rear axle. The four-speed transmission featured a freewheel mechanism. The suspension was conventional with rigid axles and half elliptic leaf springs all round. The early cars had a 112 in (2,845 mm) wheelbase but this was stretched by 3 in (76 mm) for 1935 with the extra space giving the rear passengers more leg room. A top speed of 70 mph and economy of 24 mpg was claimed in contemporary advertisements.
The bodies were traditionally built with steel panels fitted to a wooden frame. A six light Saloon (£278), four light Sports Saloon with small external boot (£298) and four-seat tourer (£288) bodies were available.
5775 of this version were made.
This car subsequently became known as the P1.
An updated version, as we have here, appeared in 1937 with mainly styling changes but the chassis was stiffened and Girling rod brakes replaced the hydraulic ones that had been fitted to earlier cars. There were no more tourers pre war but around 200 were made in 1947 and 1948  with bodies by Tickford. The 1938 models had fixed bonnet sides and for 1939 synchromesh on the top two ratios on the gearbox. Disc wheels became an option to wire wheels in 1939 and standard on post war models.
Our car, along with its smaller 10 hp and larger 14/16 hp brothers became known as the Rover P2.
Our 6' light example is superbly finished in pearl Grey with stunning dark tan leather upholstery.
'As new'  headcloth and matching carpets, complemented with beautiful polished dashboard and door capping's,
The chrome is perfect and the engine has received a comprehensive overhaul to include white metal plating & new pistons etc..
Within the cars history folder is an early green registration book containing owners details and numerous duty paid stamps from circa 1959 onwards.
This folder also contains various MOT certificates to include a very early MOT test certificate dating back to 1966.  Only a handful of years after the introduction of the MOT 'Ten year test'
Out last week for this batch of photographs 'FGO' performed faultlessly. Keen engine pulling well, smooth gearbox, prices steering and quite transmission.
All in all a lovely example, previously supplied by ourselves and we are very pleased to off


Visit the company website by clicking the link below
Mathewsons