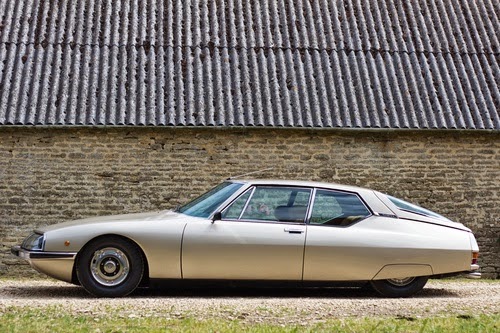 The Citroën DS was a revolutionary design that would change the landscape of the automotive world like no other car had before it, or since for that matter. How to replace such a car would always be a difficult act to follow, and it would fall to the SM to serve this tall order.
Talk of a high performance version/replacement of the DS began in 1961 with the inception of "Project S". Several concepts were made with designs becoming more and more complex and advanced. In 1968 Citroën bought Maserati and the acquisition gave them access to Maserati's fabulous 2.7 Litre V6 engine, which would go on to power the SM.
First revealed to the public at the Geneva Motor Show in 1970, its arrival brought many technological advances that have only recently spread to many mainstream manufacturers today. Suspension was always Citroën's strongest area, having revolutionised suspension design with the introduction of their Hydropneumatic set up. Developed during the Second World War and first seen on the Traction Avant 15H in 1954, it used oil and air as its main components and was one of the defining features of the DS, offering unrivalled comfort and control. This incredible system was developed further for the SM along with other groundbreaking designs, including variable assist power steering that offered drivers full assisted steering for the first time. Not only did this design allow for 1 turn lock to lock to make steering at parking speeds incredibly easy, but the steering was ingeniously engineered to reduce in sensitivity as speed increased, a common setup on modern cars, but unheard of in 1970!
This particular example is one of the more desirable carburettor examples, fitted with the fantastic 2.7 Litre V6. Although later cars were fitted with a fuel injection system, it proved to be problematic and added considerable weight. Showing just 94,000km (58,000 miles) from new, it presents beautifully with excellent paint and interior finish and no signs of any rust or rot in any areas. Mechanically the car is in wonderful condition and drives beautifully with the sophisticated steering and suspension systems working perfectly.
Designed in an era where technological advancement and sophistication came before cost, this iconic car offers one the chance to own and enjoy a significant piece of design and automotive history.

For further information of this car & other stock please visit:
COTSWOLD CARS
Posted by jeffharris at 09:14