Coachwork by Panther Westwinds
Chassis no. 15275
Built at a cost of approximately 4 new Ferrari Daytona models 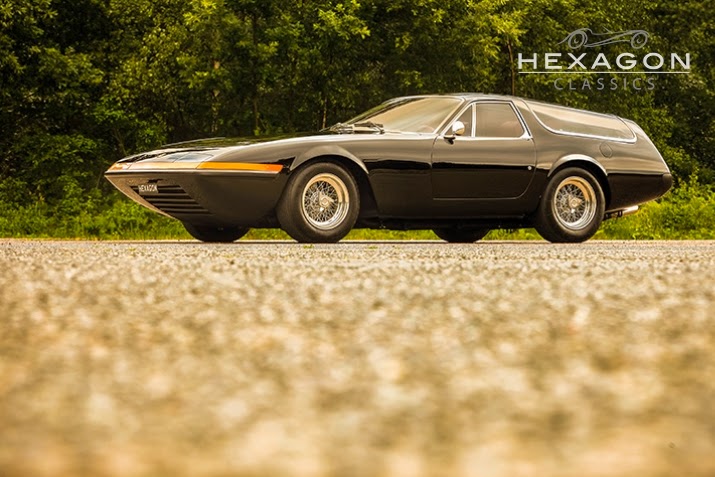 Ferrari’s fabulous Daytona needs little introduction. Power came from a four-cam V-12 displacing 4,390cc and producing a healthy 352 horsepower at 7,500rpm, which was a lot of revs for a road car in 1969. Performance was nothing short of sensational, with a 0-60 time of 5.9 seconds, which was certainly aided by the hefty torque rating of 319 pound-feet at between 5,000 and 5,500rpm.
If the Daytona was no ordinary road car, this particular 365 GTB/4 is a truly extraordinary Daytona. According to Ferrari authority Marcel Massini, car number 15275 was the 805th Daytona Built. A standard Berlinetta, it was finished in Rosso Dino with a Nero leather interior. When completed, it was shipped to the United States and received by Chinetti-Garthwaite, which was the Philadelphia area dealer, located in Paoli, Pennsylvania.
This car's stunning original conception came about when in the early ‘70s, real estate developer Bob Gittleman strolled into Chinetti Motors asking for something a bit different — and Coco was only too happy to oblige. What could be more individual than a Ferrari Daytona estate? Industrial designer Gene Garfinkle has often been credited with designing this outrageous Dan Dare-style machine, much to Chinetti’s indignation: “Garfinkle did the rendering, he did not pen the car at all, it was completely my design.” With the drawings completed, Coco had to decide who would build it. “We were distributors for Panther Cars in those days,” he explains. “We’d been over there and it was a nice high quality shop. I said: ‘Why don’t we make the first Ferrari made in England?”
Two years later, the car was with Panther Westwinds in Surrey England. In addition to building its own historically-influenced vehicles, the firm was capable of very high quality coachwork conversions and interior trim. Working to a design by Luigi “Coco” Chinetti Jr. and freelance auto designer Gene Garfinkle, Panther Westwinds modified the Daytona into a striking shooting brake, which retained very little of the original exterior save the broad bonnet. Unlike traditional shooting brakes — which were certainly not built on Ferrari chassis — this Daytona estate avoided a traditional rear tailgate by using gullwing-style rear side windows for access to the cargo deck. The interior was also substantially new, with the instruments mounted centrally in the opulent wooden trimmed dashboard. Even the cargo load floor featured wooden decking.
Both Chinetti and Jankel are proud of the sleek aluminium-bodied two-seater. “It was a beautiful car,” Jankel recalls. “The front was a lot like the Daytona, but was completely restyled. As far as I remember, only the windscreen, A-pillars and doors were kept.”
Delivered to architect and builder Bob Gittleman in Florida, in the Winter of 1975/1976 it was featured on the cover of the Prancing Horse. Gittleman retained it for several years and advertised it for sale in 1980. A few years later, it was in the hands of Joe Marchetti, who was marketing the car for sale. The unusual Ferrari shooting brake passed through several hands, including those of fabled Texas oil man, car collector and race team owner John Mecum. In 1988 - the one-off Daytona was acquired by New Jersey Ferrari collector Bill Kontes. The car ultimately changed hands more than a decade later when it was sold to France.
In 2000 it was displayed at the Concours d’Elegance at Paleis Het Loo in Holland and a year later it appeared at the Cartier Style et Luxe Concours at the Goodwood Festival of Speed. Showing fewer than 4,000 miles on its odometer and in concours throughout, this one-of-a-kind custom Ferrari is spectacular and unique in virtually every way.
Hexagon Classics acquired the car last year - and set about a comprehensive restoration of this unique coachbuilt Ferrari - employing the very same artisan who work built the car whilst working at Panther in period - ensuring 100% authenticity in the restoration of this car. Additionally the car has benefited from mechanical restoration by an offical Ferrari service agent - and the car today is in stunning - ready to show concours condition.
The car is shortly to be the subject of an extensive feature in Forza magazine - due to be published this summer.
This car presents a serious collector with an opportunity to own a unique coachbuilt Ferrari - 1 of 1 - and likely to be invited to events all over the world.

The car is available for immediate inspection in our Kensington showrooms.

HEXAGON CLASSICS
Posted by jeffharris at 08:50