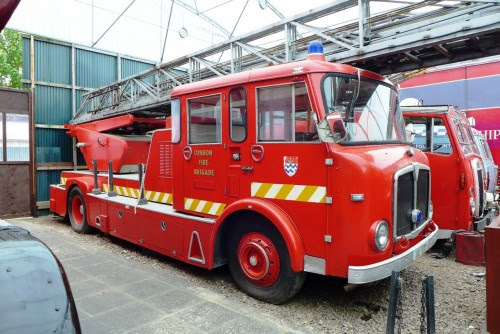 Merryweather & Sons Ltd, fire engineers since 1692, is a name that has been associated with fire-fighting for over 300 years.
AEC was established in 1912 building buses, motor coaches and lorries. The acronym stood for the Associated Equipment Company and they soon became one of the largest and most successful manufacturers in Britain.
An association between these two well-established companies resulted in the AEC Mercury Merryweather Turntable Ladder Fire Engine, which became a familiar sight in many towns and cities of Britain. Manufactured during the 1950s and 1960s by Merryweather & Sons Ltd of London, the appliance used the Southall-manufactured AEC Mercury chassis fitted with fully enclosed Merryweather-manufactured cabs and bodywork. Merryweather also installed the 100 ft hydraulic turntable ladder
The AEC Merryweather TL used the AV470 six cylinder in-line diesel engine with a capacity of 7,658cc (467 cubic inches – hence the 470 tag) producing approximately 140bhp. Although AEC went out of business in 1979, these Mercury-based turntable ladders continued in service for many years, those in the London Fire Brigade starting to be withdrawn from use in 1986, all being de-commissioned and sold out of service by 1992 when traditional turntable ladders were being phased out in favour of more technologically advanced high-reach appliances.
Dating from 1966, this particular vehicle was in regular service with the London Fire Brigade based in Greenwich until 1988 when it was deemed too expensive to keep in working condition. Numerous reports are on file listing minor defects during its working life; items such as poor wipers and dim headlights.
The final report details more serious issues with wear and tear on the ladder, reporting excessive lateral movement between 81ft and 93ft – which must have been very alarming for the poor fireman at the top trying to hold on. At the time of cataloguing the V5 could not be readily located but it is still registered on the DVLA database and the file does include a handy instruction manual on the Pumping Engine used in the Merryweather Turntable Ladder. Before joining the Stondon Collection, it was used in the TV series 'London’s Burning' and could doubtless earn a good living as a film prop in the future.
This lot will be available to view at Stondon Museum (SG16 6JN) on Friday 5th June. Although this vehicle will be offered for sale at Brightwells (HR6 0DE) it will need to be collected from Stondon.Due to where the vehicle is currently stored, collection may not be possible for up to 4 weeks after the auction..