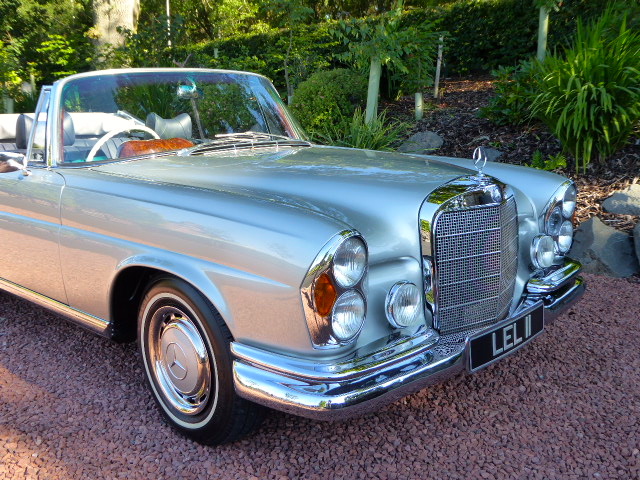 1968 MERCEDES BENZ W111
This story is a little different from the usual. I suppose it all started when I used to see a Mercedes convertible parked in a beautiful drive way in an affluent area of Glasgow when I was growing up as a kid however It was more likely as an adult and my visits to the Essen techno classic car shows in Germany where I really got to see the beautiful cars in detail, that a love affair began.
Most people will tell you that I am an air-cooled Porsche guy, which is true however in the Spring of 2008, I received some life changing news….. I was going to be the father of twins. Panic started how do I get 2 kids + twin buggy + travel packs etc in the back of a pre 73,911 ?
After some serious thought (all of which I cannot share however one included fitting a tow bar to the 911 … seriously) 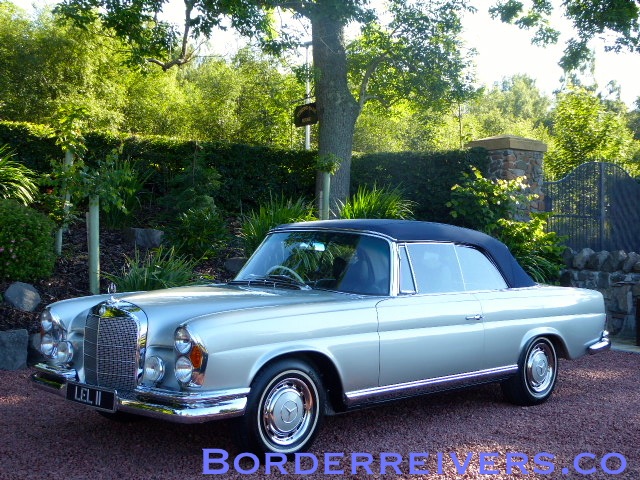 I decided this would be the perfect time for me to indulge in a Mercedes W111 Convertible, plenty of room for the kids inside in safety & comfort (no roll cage needed) a luggage area as big as most cars…… Perfect.
Now the buying, it had to be RHD, condition was everything, I had a wish list of preferred colour & spec, I wanted arm rests, head rests, ivory steering wheel, whitewall tyres, stacked headlights, etc I thought this would be easy and had no set budget. Now doing my homework & due diligence, I found out not many of these cars came to the UK & most that did slowly rotted away.
My choice was rather limited so I lowered my expectations and decided I would have to carry out some work on any car I purchased. At the time the inter web was still fairly new for classics & I trolled through magazines, joined the Mercedes owners club. Its September 2008 I have been all over the country, I have looked at 7 cars which had all been described as worthy. I spoke to Mercedes specialists during this time and inspected various cars inc Coupes at various stages of restoration to get a feel of costs & what was involved .
I got a tip off from a friend in Preston who was dealing with a dealer in Lytham St Annes, the dealer had a Mercedes 220 se convertible who had purchased it from the original owner 25 years previously it was his own personal car but had been unused for several years as he couldn’t get it to run properly, he may consider selling it ? I got his number and made arrangement to view the car. 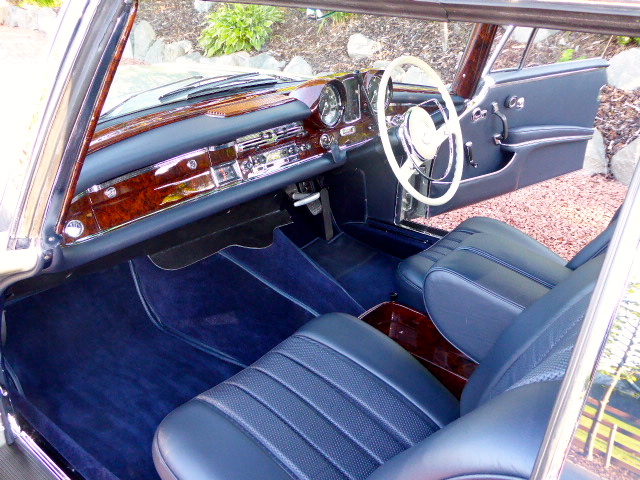 It was almost what I wanted . It was the correct colour, it was a convertible, it had 1 previous owner, it was a genuine low mileage,with the original service book stamped up to 1979 showing 36031 miles, the condition of the body was superb and rust free however the hood was faded, the front seats needed recovered, dash lacquer on the wood was flaking, chrome needed re-chromed, tyres cracked and non runner however it was the most genuine convertible available to the market at that time & as far as I know since. I made the Purchase. My plan was to freshen it up & get it road worthy to use immediately, I managed to get it through an mot in October 2008 which give an idea of the general condition. The car was on display at the Mercedes club in April 2000 celebrating the 50th anniversary of the club (copy in the file and the car look splendid) 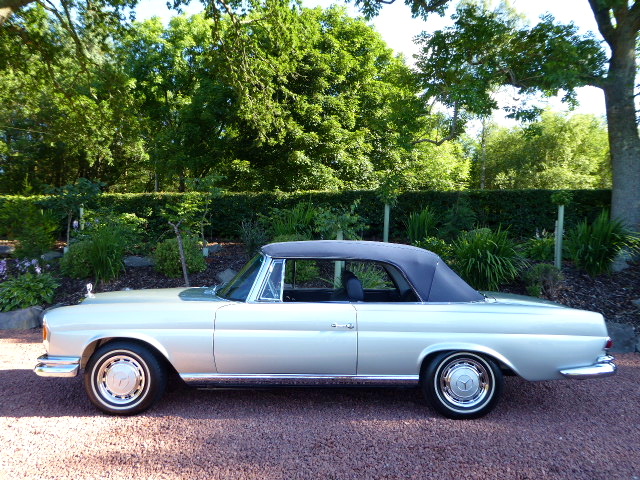 Well, the Kids arrived on March 2009 (boy and girl) I had to buy a discovery while the Mercedes was being made good.
Me and my OCD, wanted everything just right as I had imagined it, so I stripped the car to a shell. The only new panel required was the front crossmember panel, the car was full repainted in its original colour £15000.00 in body and paint, dash was redone by veneers in motion who do the Aston Martin factory work £2046.00, full retrim including hood by Aldridge £10500, re-chrome by Castle chrome £9600, Whitewall tyres £500, Stainless steel exhaust system, New old stock Ivory steering wheel £1200, new arm rest , head rests & parts etc, the totals over £50000.00, not inc labour.

The car is only just totally finished !!! As we are so busy with clients cars. My kids are now 7, they can now fit in the 911 without a tow bar being required. So someone will benefit from my 7 years of chasing the perfect Mercedes Convertible. The price is a cost covering exercise I am sure its worth more.
Visually it is a 280, like the 280 SL Pagoda is the (coveted car) but to most the 230 is the better car. 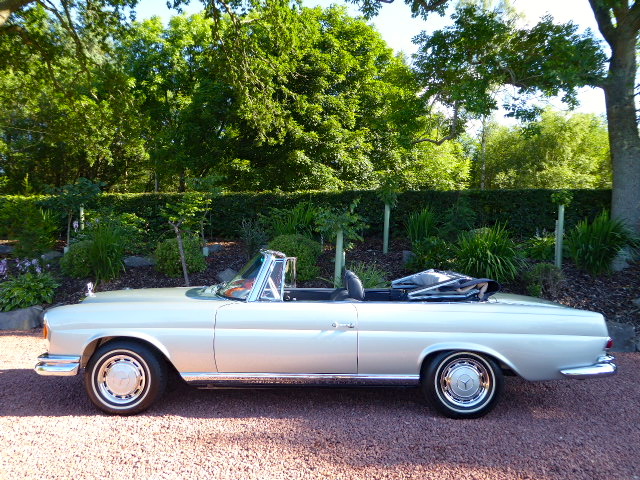 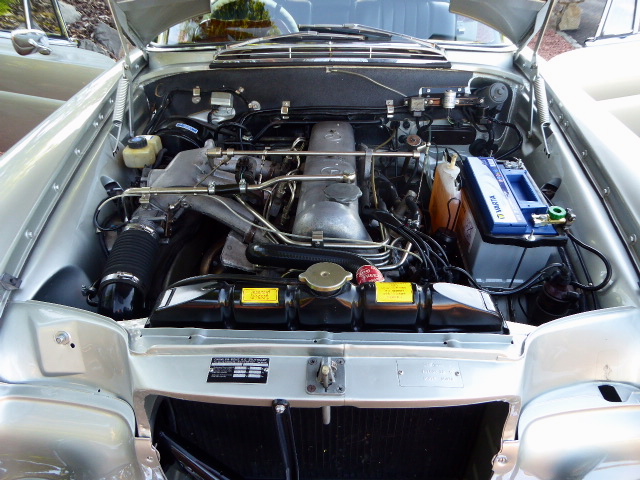 This Mercedes was supped new to Mr Leonard Edwards Ltd of 36 Great Marlborough Street,London on the 23rd of February 1966 and registered LEL 11 which it still retains & is transferable.
Mr Edwards sold the car to Mr Peter Standfield of Martonmere Autos Ltd, Peel corner, Preston new road, Blackpool, FY4 5JZ on the 16th of May 1983. Mr Standfeild had registered the car in the company name (Martonmere Auto Ltd) 16-05-1983. He then registered it in his own name on the 31-12-1996 Mr Peter Standfield, 44 Heyhouse Lane, Lytham St Annes, FY8 3RW
SOURCE: http://borderreivers.co/portfolio/mercedes-scotland-1966-convertible/
SELECTED BY :CLASSIC CHATTER