"CLASSIC OF THE DAY"
Next weekend sees the Annual London to Brighton Veteran Car Run. The event now runs over three day starting with Bonhams Auction on Friday & the Regent Street Motor Show on Saturday, culminating in the run to Brighton on Sunday.
For the next week we will be looking at Veteran Cars currently available plus some of the auction lots at Bonhams Sale.
To start off we look at a car from the respected dealer Gavin McGuire.
"Gavin McGuire Fine Automobiles" 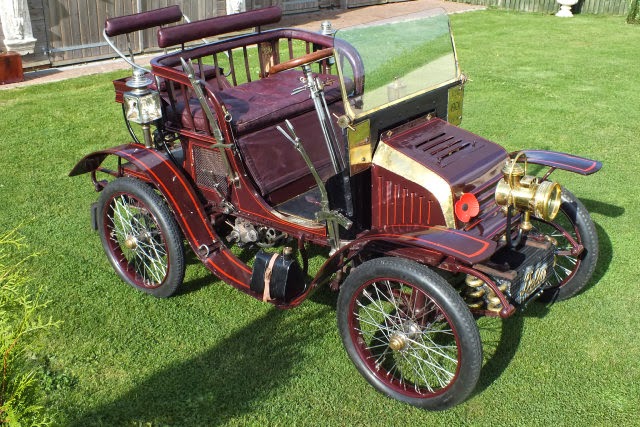 This very pretty Veteran Car Club dated voiturette, car number 4, was made by Usine Delin of Louvain in Belgium and is one of only three such vehicles known to survive. Delin made cars for only two years from 1899 until their factory was taken over by Usines Eugene Mathieu who carried on making cars of their own design until 1905. The car was for many years part of the extensive A W F Smith collection based in Cross in Hand in East Sussex.
It is a quite charming machine with lovely original bodywork which is evidenced by a pre restoration photograph of the car as well as a very early manufacturer’s publicity picture. It has an attractive stick-back front seat and a small seat at the rear which is also quite handy as a place to put the lovely leather suitcase which comes with the car.
Its Belgian made Kelecom single cylinder engine, which is rated at 4 hp, is linked by a drive chain to a transverse mounted three forward speed and reverse gearbox which in turn drives the rear wheels by means of a further chain. It has a conventional steering wheel with throttle and ignition controls on the column, a floor mounted pedal for the hub mounted contracting band rear wheel brakes, a lever to operate rubber brake pads on the rear tyres plus a sprag to hold you on steep hills.
I have only just seen the car and I have yet road tested it but it has been driven recently by a friend of the owner and it took part in the Brighton Run in 2009, 2010, 2011 and 2012. I have heard it running and was impressed not only by how readily the engine started but also how healthy it sounds - this is not really surprising as it is reported by a recent owner that a substantial amount of work has been done on both it and the gearbox which claim is supported by a number of used mechanical spares which come with the car which I understand were replaced during the rebuild.
It comes with a card Log Book dating from October 1946 which could well be when it first came in to England though I have no evidence to support that theory!
The Delin has been entered for this year’s London to Brighton Run (it has start number 67) and if you are able to make a quick decision you can take it on the Run yourself!