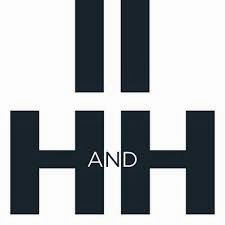 "CLASSIC OF THE DAY"
We take a last look at tomorrows H&H Auction at the Imperial War Museum, Duxford
with the following
1908 DARRACQ TYPE R 10/12hp 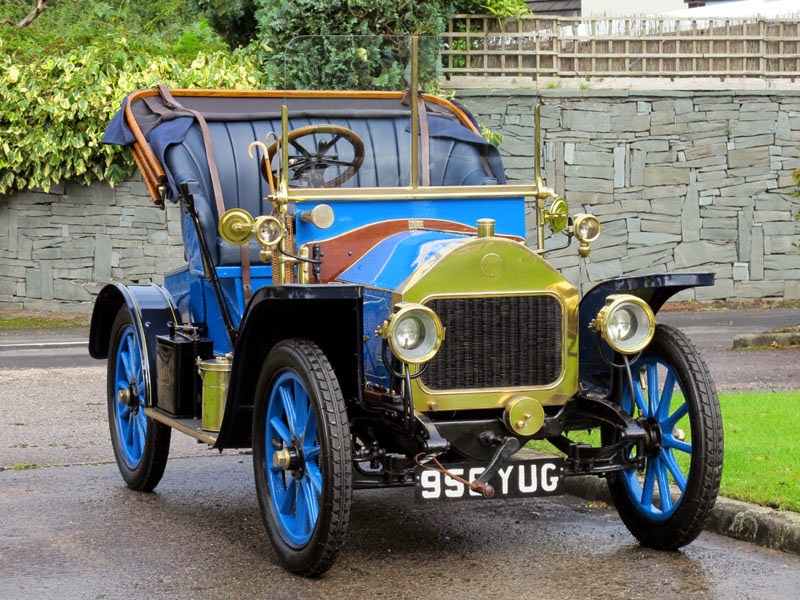 According to a typewritten account in its history file, chassis 17060 lay idle in a Somerset orchard for twenty-five years before being `discovered' during 1940. Returning to the road the following decade, the Darracq was issued with Certificate of Dating No. 399 by the Veteran Car Club of Great Britain on 15th April 1954. In addition to identifying its year of manufacture as 1908, the Club noted that the Type R was road registered as `LB 6416', wore two-seater coachwork and had the larger twin-cylinder 10/12 engine (bore 112mm x stroke 120mm).


Acquired by Howard L. Gutteridge during 1964 but infrequently licensed over the next ten years, chassis 17060 found a more active custodian in J. Stuart White who used it for the Hull-Scarborough Run, Peter Black Rally and other North East Section events. Migrating to Holland during the late 1980s, the Darracq appears to have been on museum display for a while (or so various accompanying photographs depicting it alongside similar brass era cars and period-attired mannequins would suggest).


Treated to an extensive restoration in 2004, the Type R had much of its woodwork renewed ahead of a repaint from Green to Blue plus a re-trim and attention to its wiring and wheels / tyres etc. Entering the current ownership some three years ago, the two-seater has since been re-registered by the DVLA as `956 YUG'. Stated by the vendor to run well and to have a surprising turn of speed thanks to its willing twin-cylinder engine and three-speed manual transmission, the Darracq remains highly presentable. 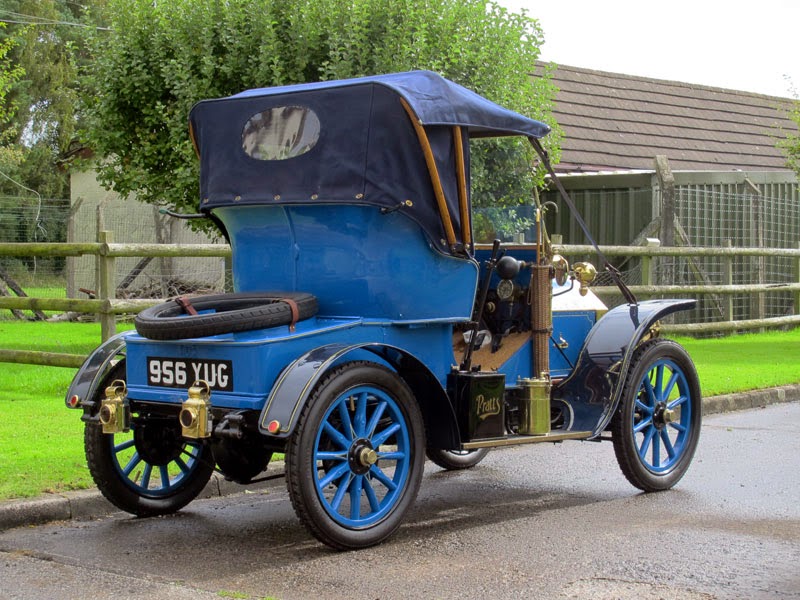 Automobiles Darracq S.A. was a French motor vehicle manufacturing company founded in 1896 by Alexandre Darracq. [1]
Using part of the substantial profit he had made from selling his Gladiator bicycle factory, Alexandre Darracq began operating from a plant in the Parisian suburb of Suresnes. The company started by building electric motor carriages until 1900 when they produced their first vehicle with an internal combustion engine engine to a Léon Bollée design. This was not a success and in early 1901 they launched a single cylinder 6.5 hp light car designed by Paul Ribeyrolles. This was Darracq’s first successful model.
In 1902, Alexandre Darracq signed a contract with Adam Opel to jointly produce vehicles in the German Empire under the brand name "Opel Darracq."
In late 1902, a consortium of London financial interest led by Alfred Rawlinson initiated a takeover of Darracq resulting in the creation in early 1903 of A. Darracq and Co. Ltd. Alexandre Darracq was managing director and the chairman was JS Smith-Winby. [2]
1904 The Darracq automobile company prospered and the 1904 "Famous Fifteen" was a production model of exceptional quality that helped the company capture a ten percent share of the French auto market.
1905 Three years later, the company expanded to Britain, incorporating the A. Darracq Company (1905) Limited with a capitalization of £650,000. The company was registered on 17 November, to take over the motor manufacturing business of a company of almost similar title. [3]
1905 Ribeyrolles designed a 22.4 litre V8 with ohv which took the Land Speed Record on a public road at Arles with a speed of 108.5 mph. This brilliant engine can be considered as the ancestor of all subsequent V8s. The car later proved capable of 120 mph and can be seen in VSCC events. [4]
1906 Produced 8-10 hp. (two-cylinder), 8 hp. (single-cylinder), 10 hp. (two-cylinder), 15 hp. and 20-32 h.p. (both four-cylinder) shaft-drive cars. [5]
1911 Directory lists them as Darracq A. & Co. (1905) Ltd. Orpheus Street, Camberwell, London SE and as motor car manufacturers. [6]
In the summer of 1912, following the failure of a range of new models incorporating a rotary valve under Henriod patents, Alexandre Darracq resigned and retired from the motor industry, having earlier taken the precaution of unloading his shares. The controlling British financial interests recruited Owen Clegg who relocated to the Paris headquarters to take over as the chief engineer of the company, with Walter Hopkins as general manager. During World War I, the Darracq factory was converted to the production of various war materials. [7]
1913 A. Huntley Walker was Managing Director and Norman Craig became Chairman.
1913-1917 For a list of the models and prices see the 1917 Red Book.
During World War I, the Darracq factory was converted to the production of various war materials.
1914 Listed as motor car manufacturers, their speciality being Darracq motors. [8]
1918 Expansion of share capital to fund the acquisition of a substantial interest in Heenan and Froude construction engineers of Worcester and Manchester[9].
1919 Directory lists them as Darracq, A. and Co. (1905) Ltd. Brill Street, Fulham, London SW6 and as motor car manufacturers. [10]
1919 Darracq took over Clement Talbot including the British Talbot and Talbot models. Cars built at at Suresnes were then marketed as Talbot-Darracq[11].
1920 Acquired motor car spring business of Jonas Woodhead and Sons of Leeds[12].
1920 Merged with the Sunbeam Motor Car Co of Wolverhampton. Name of company changed to S. T. D. Motors Ltd[13].
1920 The first annual meeting of the company under its new name S. T. D. Motors Ltd. [14]
1920-1922 Cars built at Suresnes, and early examples of the 8hp built by London Talbot, were badged as Talbot-Darracq.
1923 - 1934 Suresnes built cars, now called Talbot in France, that continued to be imported into GB badged as Darracq. The Darracq works in Acton built bodies for the other STD marques, chiefly Talbot from Ladbroke Grove.
1935 When Rootes took over Sunbeam and Talbot following the bankruptcy of STD Motors, Anthony Lago, backed by British financiers, used an option he held to buy the plant at Suresnes. Cars built there were eventually called Talbot-Lago, but up to 1939 they continued to be badged as Darracq if imported into GB to avoid infringing Rootes Group's right to the Talbot name in GB.[1