"CLASSIC OF THE DAY"
Veteran Car Week
For our Friday classic we make our final visit to Bonhams London to Brighton Sale to be held later today. Veteran cars are not everyone's cup of tea but we as enthusiasts much make every attempt to promote their continued use. Motor engineering has come a long way from the dawn of motoring when 6hp was deemed a danger to health, can you imagine the outcry at speeds that modern cars are able to reach with power outputs of 1001bhp.
If you,ve never been to any the London to Brighton events now is the time to see what you've been missing. 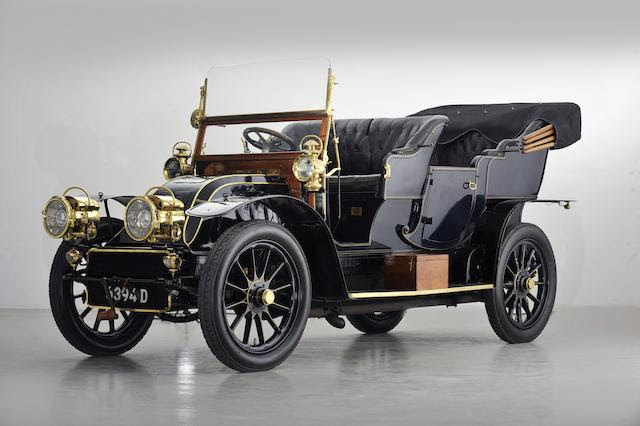 Established in Puteaux, Seine in 1901, CGV took its initials from those of its three founders: Messrs Fernand Charron, Léonce Girardot and Émile Voigt, all of whom had been successful racing drivers for Panhard. Of the trio, Charron had enjoyed the greatest success, winning the Marseilles-Nice and Paris-Amsterdam-Paris races in 1898 as well as the inaugural Gordon Bennett Cup of 1901. Prior to the foundation of CGV, Charron and Girardot had been partners in a Panhard dealership and CGV's first automobiles were designed along similar lines, albeit noticeably lower-slung. The first CGV was powered by a 3.3-litre 15/20hp four-cylinder engine driving the rear wheels via a four-speed gearbox and chain final drive. A steel-reinforced wooden chassis was used, featuring transverse-leaf springing at the rear. Amazingly, the fledgling firm then produced the world's first straight-eight engine, which was exhibited in a prototype model at the 1902 Paris Salon. There was immense interest but it never entered production.

CGV soon acquired a reputation for quality and an equally distinguished clientele, which included the King of Portugal, various lesser European royals and members of the British aristocracy. It was imported into the USA and sold there as the 'American CGV' while a limited number were actually assembled in New York and delivered with locally built coachwork. By 1905 the early models' atmospheric inlet valves had been dropped and the range had expanded to include 'T-head' fours of up to 9.8 litres, some with shaft drive. Despite CGV's success, the partnership was in crisis: Girardot and Voigt left to pursue other projects and for 1907 the cars were badged as 'Charron', continuing as such when Fernand Charron left to join Clément-Bayard in 1908.

The right-hand drive CGV offered here is an example of the H1, a four-cylinder 6¼-litre car whose T-head engine was rated at 25CV under the French system but would have been judged a 32.8hp unit by the RAC method. Transmission is by means of a cone clutch, four-speeds-and-reverse sliding-pinion gearbox, and twin chain final drive. The chassis is of CGV's combined steel/timber construction, with suspension by semi-elliptic leaf springs at the font and semi-elliptic plus transverse springs at the rear. Brakes – of the internal expanding type – are fitted to the rear wheels only and there is also a transmission brake. Wooden artillery wheels are fitted. L'Autocatalogue of 1928 (published while Charron was still in business) states that 79 Type H (5.7-litre) and H1 cars were built between December 1903 and the end of 1904 with numbers ranging from '2001' to '2079'.

This particular car, number '2054', was purchased new in 1904 by one of CGV's typically wealthy patrons: Olry Roederer of the champagne house, Louis Roederer, Reims. Producer of the famous and exclusive Champagne Cristal, Louis Roederer is today one of the few surviving independent maisons de champagne. At time of the CGV's purchase, French law required that all cars should carry a plaque recording the owner's name and address, and Olry Roederer's is given as a château to the north west of Paris. Sadly, Roederer died in November 1904 so did not have the opportunity to enjoy the car for long.

The CGV then disappeared from view, re-emerging in 1968 when it was advertised for sale in L'Automobilist magazine's September/October edition by one Bill Tallet of 6 rue du Pôle Nord, Paris. It is understood that the car had been extracted from the Roederer château. John Wilkins purchased the CGV and brought it to the UK, and in November 1969 sold it on to the noted collector and enthusiast Bryan Goodman, who kept it until 2000.

When rediscovered in the late 1960s, the CGV had been updated with an Edwardian straight-sided body, a not uncommon means by which early but technologically advanced cars were kept stylistically up-to-date. This body, which carried coachbuilder Henri Binder's plates, was removed and sold at auction in 1972. To replace it, a more appropriate body in Veteran-period style was built with reference to 'The Coach Builders and Wheelrights Art Journal' and illustrations in contemporary CGV brochures. A mechanical restoration was carried out at the same time. Bryan Goodman used the CGV for the next 30-or-so years on numerous old-car events in the UK and for rallies and tours abroad, including returning the car to its native land in 1998.

In 2000 the CGV was sold to the immediately preceding owner, during whose custodianship a thorough mechanical and cosmetic refurbishment was undertaken by specialists NP Veteran Engineering of Heathfield, East Sussex at a cost in excess of £60,000. Works carried out included comprehensively overhauling the engine, transmission, steering and suspension; rebuilding the wheels; re-trimming the interior in black leather; renewing the hood; and making tonneau covers and a windscreen. The car was repainted in its current livery of dark blue with black mudguards, and fitted with fine brass BRC 'bull's eye' headlamps and W&G Du Cros sidelights. The only notified deviations from factory specification are a starter motor, later carburettor, and flashing indicators.

Its owner continued to use the CGV on rallies throughout the UK, Ireland and continental Europe, and also participated with it annually on the London-Brighton Veteran Car Run, driving to events and enjoying 100% reliability. Because of his advancing years, he eventually sold the CGV, which was purchased by the current vendor at auction in Paris in February 2006. Since then, its owner has used the CGV on numerous Veteran Car Club events and participated successfully in every London-Brighton Run from 2006 to 2013. He reports that the car can cope with six persons aboard, takes steep hills easily in its stride, and has never once let him down. The rear wheels were renewed in 2014.

Accompanying documentation consists of a V5C registration document, FIVA identity card, VCC Certificate No. 2040 and an MoT certificate valid until July 2015, together with two folders of historical and other information detailing monies spent, events entered, etc. Presented in lovely condition, this rare CGV Phaeton represents an exciting opportunity to acquire one of the finest and most powerful Grand Touring cars of its era
SOURCE: 2014 BONHAMS AUCTIONS
Posted by jeffharris at 09:34