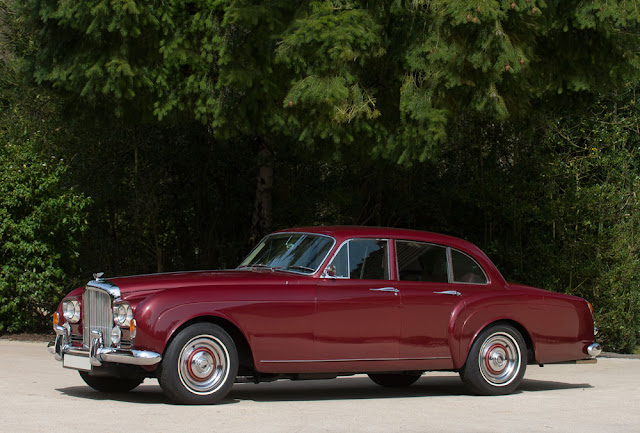 
FIVA Carte d’Identité, one of 18 LHD S3 Flying Spurs
‘Matching numbers’, in exceptional condition with the original interior
Dubbed ‘Red Lena’ by Marlon Richards, the son of Keith Richards (former owner of a sister car)
Presented ‘as delivered’ in Burgundy with Red leather 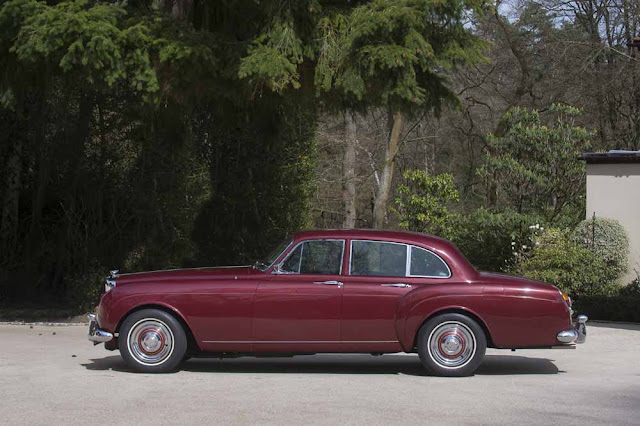 The Bentley S3 Continental Flying Spur
Introduced in 1955, the Bentley S-Type and equivalent Rolls-Royce Silver Cloud saloons were thoroughly modern, spacious, comfortable, quiet and powerful. In production for 10 years, they were the final series-production coachbuilt cars from Crewe.
Building on the legendary status of the ground-breaking R-Type Continental, Bentley soon announced a two-door S-Type to be available as a stunning drophead coupé by Park Ward and a desirable and sporting ‘fastback’ by H.J. Mulliner.
These cars were fast – thanks to aluminum coachwork, a raised compression ratio and longer final drive – and once again found favour with the super-rich of the day. It took two years before the company relented to customer demand for the pace and exclusivity of the Continental combined with the practicality of four doors. H.J. Mulliner of NW London created a superlative Continental saloon, subsequently titled ‘Flying Spur’ after the Clan Johnstone crest of Mulliner’s then managing director, Harry Talbot Johnstone. The first car was on the road in May 1957 and deliveries commenced with a pair exported to the USA just two months later.
Facing competition from across the Atlantic, in August 1959 Rolls-Royce announced a new, 6,230cc V8. The light alloy unit weighed the same as the outgoing ’six but produced significantly more power, perhaps as much as 25%. The new S2 Continentals – only ever fitted with automatic gearboxes – were faster and even more refined than ever. At the same time, making use of the more compact profile of the new engine, the distinctive radiator shell was lowered and slightly raked forward.
The Bentley S3, introduced in October 1962, took this process of modernization one step further. More than simply a twin-headlamp face-lift, S3s featured a raft of other changes including another 1.5in taken off the height of the radiator, which was raked further to aid visibility. All S3 engines had bigger, 2in SU carburettors and this modification, together with raised compression, giving the cars an edge in performance, particularly above 60mph. For the first time as standard, the front seats were individual, rather than a single bench.
Production of the magnificent S3 finished mid-1965 just as the all-new Silver Shadow was announced. A total of 310 S3 Continentals had been sold, 87 of them four-door Flying Spurs. Of these, only 18 were left-hand drive. 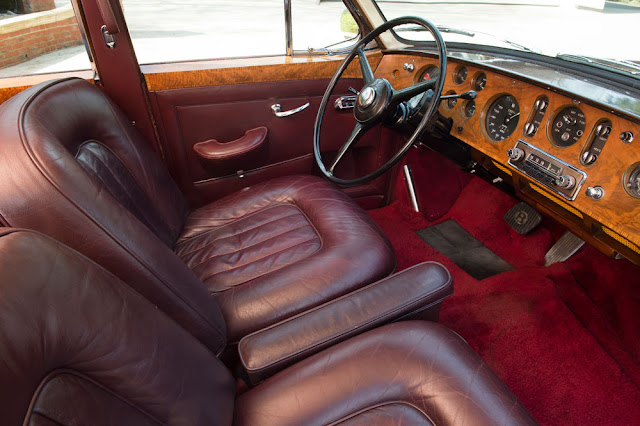 This Motor Car
According to factory build sheets, copies of which accompany the car, this Bentley S3 Continental Flying Spur was ordered by official Rolls-Royce and Bentley agent Peter Satori of Pasadena for Mrs. Stephanie S. Busch, who lived in the same exclusive district in Southern California. Santori was something of a ‘dealer to the stars’, whose clients included British actor James Mason and Elvis Presley.
Mrs Busch’s address was listed as ‘160 South San Raphael Avenue, Pasadena’, though research by Kidston SA in 2018 confirms this to be ‘160 South San Rafael Street, Pasadena’ – the famous ‘Max Busch House’, a significant late-1920s mansion in the ‘English country cottage’ style by the distinguished architect Paul Revere Williams. It was used in several motion pictures, including 1989's ‘Batman’ and 1990's ‘Rocky V’.
The name Busch is synonymous with Pasadena after St Louis brewing magnate Adolphus Busch and his family settled there in the late-19th century, preferring its warmer climate in wintertime.
The redoubtable Mrs Busch settled on the following specification, all carefully typed up in Crewe and dated 20 August 1962: 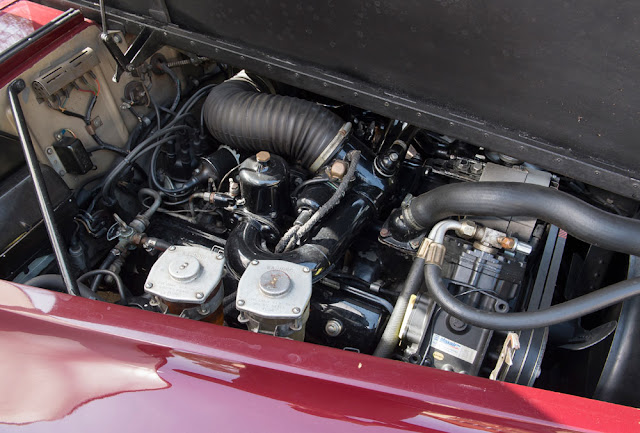 On the death of Max Busch in 1967, ‘BC44LXA’ was sold to fellow American Larry D. Bennett who kept if for five years before selling it to Dr Jack Klein. The car then moved back to Europe in 1989, when British marque specialist PJ Fischer sold ‘BC44LXA’ to Swedish national Börje Andersson.
Andersson enjoyed the car for nine years before selling it to fellow Swede and serious car collector Jonas Lidén. Over many years, Lidén owned a number of top-tier European cars including a 1954 Ferrari 250 Europa and a 1965 Ferrari 275 GTB. The Bentley did not last long in his tenure as it was soon moved on as part of a multi-car transaction to finance the purchase of a Ferrari 250 GT California Spider LWB via a French trader, who kept the car for 10 years. Our client bought it at auction in 2008.
During this 56-year period, ‘BC44LXA’ remained meticulously maintained and always garaged. In recent years preeminent British marque specialists P&A Wood and Clark and Carter have looked after it.
The current owner, a European product designer of note, is a close friend of Keith Richards’ son, Marlon. Richards Snr is well known for owning a late-production Bentley S3 Continental Flying Spur, a car he always referred to as ‘Blue Lena’ after its colour and the jazz singer Lena Horne. Marlon Richards is just as enthusiastic about ‘BC44LXA’, christening it ‘Red Lena’ – high praise.
The EU-registered car comes complete with copies of much original documentation, all books and tools and could well be, as the vendor states, “the best contender in any unrestored class of any concours in the world”. Keith and Mick might have sung 'You Can’t Always Get What You Want', but in this case, for those seeking the ultimate unrestored, totally on-the-button S3 Flying Spur, we’d disagree.

Selected by
IDRIS THE SQUIRREL