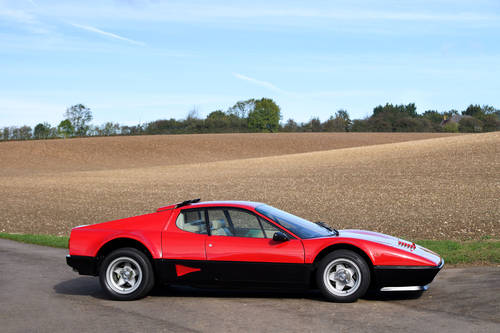 Launched at the 1976 Paris Motor Show, the Ferrari 512 BB was the second in the ‘Boxer’ series and replaced the Ferrari 365 GT4/BB, with only 101 RHD 512 BB being produced. Although the Ferrari 512 BB shared similar styling with its predecessor, the big difference was the engine: the flat-12 being increased from 4.4 to 4.9 litres and the compression ratio increased. Fitted with four, triple-choke Weber 40 IF 3C carburettors, the engine modifications produced 360 bhp, more torque and improved driveability. The Ferrari 512 BB continued in production until 1981, 929 cars being produced before it was replaced by the fuel-injected Ferrari 512 BBi.This car was the very first right-hand drive Ferrari 512 BB produced and was imported into the UK by Maranello Concessionaires in October 1976. Originally presented in Azzurro Metallizzato, a metallic light blue, with a beige Connolly leather interior, the car has been refinished in Rosso Corsa, a colour much more in keeping with both its looks and its parentage. Having exhibited the new car at the London Motor Show in October 1976, Maranello Concessionaires immediately sold it to Maranello Sales for use as a demonstrator; the car being registered OPC 86R on 2 November 1976. Ferrari’s latest ‘supercar’ naturally created considerable press interest, the car being road tested by several magazines and appeared on the front cover of the 9 April 1977 issue of Autocar.As press interest died down, Maranello Sales sold the car to Robert Cooper, then of Coopers Publicity Services, in September 1977, taking a BMW 633 Coupé in part exchange. It’s possible that Mr Cooper had the car resprayed as the invoice from Maranello Sales confirms a verbal quote for £1,045 for doing so.The car was subsequently owned by John Woodfield, the owner of Emblem Sports Cars, a very successful Ferrari dealer in Blandford Forum, Dorset, John using the car for many years before selling it. Now registered TFX 550R, mileage is noted to be 14,180 miles. Mr Woodfield, an enthusiast of 512s and an admirer of Koenig Specials modifications, fitted wider wheels with the same specifications as a Lamborghini Countach, as well as a Koenig Specials rear clam shell with wider flared arches.In October 1990, the car passed into the ownership of an Austrian enthusiast with a private collection of Ferraris, the car being stored in the collection for the next 26 years.Having purchased the car and returned it to the UK we carried out a thorough inspection and recommissioned it, carrying out a full service, an engine-out cam belt service and fitting new tyres. As could be expected, having spent more than half its life in a collection the car is in exceptional condition both inside and out. 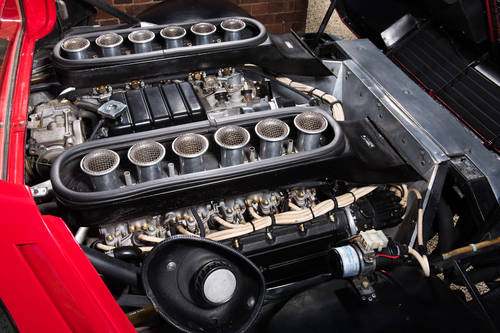 CLASSIC CHATTER
Powered by Dragons
Posted by jeffharris at 11:39