Our Classic of the Day caught my eye whilst flicking through the latest edition of Octane Magazine, and as a result we look at 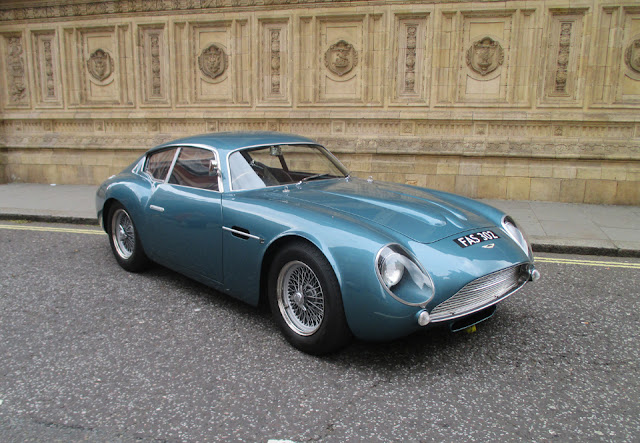 Aston Martin had all but withdrawn from racing by 1960, they had won Le Mans and the Constructor’s Championship in 1959 and felt perhaps that they could rest on their laurels. However the effect of their success on the track was out of all proportion to the cost of taking part and had an enormously beneficial effect on sales. Accordingly shortly after the launch of the DB4 GT it was decided to get back into racing but the competition was formidable and they needed a faster, lighter and more competitive car.

Initially Aston Martin approached Touring to see if they could come up with a new design but their preferred coachbuilder had its hands full with the high volume work it was already doing. However they introduced Aston Martin to the local firm of Zagato, a smaller company that could produce the specialist work required and in small numbers.

At Zagato the project was given to a 23 year junior designer fresh from University, Ercole Spada and he recalls he spent no more than a week on the main design and much of that polishing what he had produced in just a few days. Gianni Zagato wanted to add his trademark bulges over the driver’s and passenger’s heads but Spada maintained that the car should have a smooth but very low roof line. The front end in particular is as masterful as it is individual and yet retains the trade mark Aston Martin look. Two design features have characteristics markedly similar to the Ferrari 250 GT SWB, the tidy rear end treatment with minimal overhang and the aggressive shark’s grin mouth.

The ‘standard’ Touring bodied GT had a chassis that was 5 inches shorter than a DB4 and already weighed in 185 lbs lighter. The Zagato cars were built on the same GT chassis but lighter still. Everything possible was done to save body weight, lighter fittings, seats, the use of plexiglass, aluminium instead of brass, thinner gauge metal and the stripping down of the construction to the bare essentials, even the brake servo was left off. The body itself was minimalized with a low roof and wing line and was described by one writer of the day as being “as tight as a matador’s trousers”. Removing that bonnet properly endowed with bulges reveals the engine looking like its making a bid for freedom, but this is not the engine sitting high in the car, its the low frontal aspect Zagato achieved. As a result of the lower body weight the chassis could be fitted with lighter springs and floor pans. Even the steel panel below the fuel tank was replaced with aluminium.

Before the end of the project in 1963 twenty cars were built up by Zagato of which 13 were right hand drive and 7 left hand drive. It is fair to say that there were issues along the way with quality control and while the cars were much admired they were expensive and not easy to sell. In addition to these cars in the late eighties there were another four cars built up in a collaboration between the company, its chairman Victor Gauntlett and Richard Williams and these cars are known as ‘Sanction II’ cars.

Aston Martin continues today as one of the world’s most successful car brands and it is not surprising that the demand for these cars within the classic car movement has pushed their value into the millions, infrequently appearing on the market and beyond the reach of all but the wealthiest of enthusiasts.

This DB4 Zagato recreation was born out of the frustrated desire to own one of these great cars. Chassis DB4/404/R was a standard DB4 delivered to a Mr. G. Muter in September 1960. It led a full life with a number of owners and was a complete and running car when it was purchased in 1998 with a view to starting the rebuild. Marque expert Desmond Smail project managed the process with Bodylines of Olney handling the chassis and body.

Crosthwaite and Gardiner supplied an engine to GT spec with twin spark head and Webers. This was assembled by ex Aston Martin engine builder, Alan Shackell, an engineer with over 50 years’ experience and a man who worked on the original GT’s in period. This was mated to an original David Brown WR gearbox complete with Borg and Beck clutch and up-rated prop shaft. The rear axle was also rebuilt and fitted with limited slip differential.

All the suspension was rebuilt and uprated to correct spec and fitted with GT brake callipers.

The interior was trimmed by ex-Aston Martin specialist, Joe Dorrill who has 40 years’ experience with the company and was another man who worked on the cars in the period. Assisting him with the finishing was another ex-company man of similar standing, Paul Hodgkinson.

The project was finished in 2010 and had taken nearly three years to complete. The result is extraordinary, a 1960 Aston Martin DB4 restored to full GT Zagato specification and done with breath-taking dedication, attention to detail and craftsmanship. Since completion the car has had little use and accordingly still presents in impeccable condition and is offered with original registration documents and an extensive file covering all aspects of the project.
SOURCE: http://www.bradfieldcars.com/
Posted by jeffharris at 10:44