Good Morning Classic fans, for our Classic of the Day this Monday morning we take a look at
something a bit bit different which is due to come under the hammer at Historics Summer Auction on August 30th at Brooklands Museum. 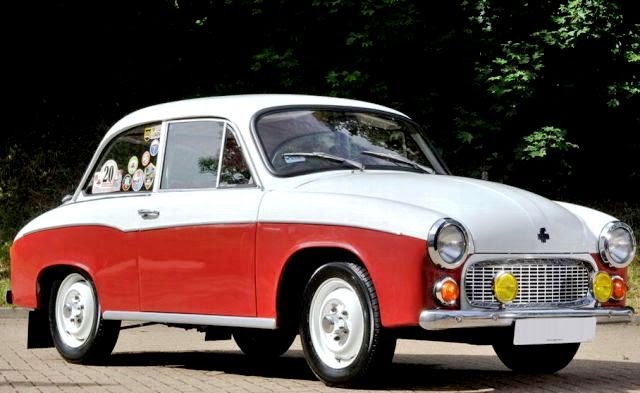 The Syrena was manufactured from 1957 to 1972 by the Fabryka Samochodów Osobowych (FSO) in Warsaw and from 1972 to 1983 by Fabryka Samochodów Małolitrażowych (FSM) in Bielsko-Biała, named after the Siren, a mermaid who, according to the legend protects the river Wisła and the Polish capital city, Warsaw. The plucky little town car, during its remarkably long production, underwent only minor modifications having been produced in various models the 100, 101, 102, 103, 104 and the most popular model the 105 with a 105L or 'Lux' model offering a gear lever and handbrake between the front seats.
This 1983 FSM Syrena 105L, finished in red and white in homage to the Polish flag, was featured in the television program 'Wheeler Dealers'. Presenter Mike Brewer purchased the car in Poland for zł7, 000 (£1,400) and drove it back to the show's UK workshop where it underwent repairs and upgrades by mechanic Edd China. Since that day, this delightful car has barely turned a wheel having been stored as part of a collection in a museum.
Some of the work detailed in Season 10, episode 10 of Wheeler Dealers includes a new steering box, brakes and alternator which replaced the original Dynamo system that was insufficient to charge the battery. This, along with the original tool kit and manuals, are all available with the motorcar. With just shy of 32,000 miles recorded and having been subject to such a detailed and documented restoration, this is offered at no reserve and with a valid MoT road test certificate until July 2015, this could be a perfect example of the iconic Polish motor car for you to drive home in but with just 35bhp, just not in a great hurry.

For more details of this vehicle & other lots for this sale please visit:
http://www.historics.co.uk
Posted by jeffharris at 08:56