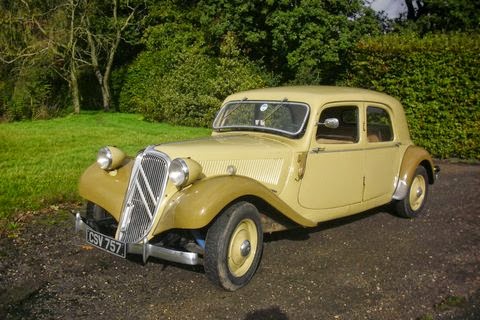 When it debuted in 1934, Citroen’s new ‘Traction Avant’ caused a sensation.
Both stylish and ultra modern, it was the World’s first monocoque production
car with front wheel drive. It was to enjoy an illustrious 23 year
production run, with variants including 7CV, 11CV and the six cylinder 15CV
models.
In total, approximately 760,000 units were produced, and apart from the
Citroen factory in Paris, they were assembled in Belgium, Cologne,
Copenhagen and at Slough in the UK.
It is difficult to avoid the much-used adjective “iconic” when describing
the Traction Avant – it was an integral part of the French landscape for
many decades and it will be remembered by many for a starring role in the TV
series ‘Inspector Maigret’.
This 1949 car is an example of the longer wheelbase ‘Normale’ (the smaller
model was known as ‘Legere’) It appears to have been assembled in Belgium.
Formerly owned by TV presenter and journalist Chris Goffey for many years,
the car has been the subject of extensive work since being imported to the
UK in 1985.
During the last few months the wiring has had attention and a new battery
has been fitted. The front wings have been restored and repainted by a local
coachworks just 2 months ago.
The overall appearance is very smart and the original cloth interior trim
is sound and tidy, with just some stains which are commensurate with age.
The braking system has also been overhauled this year. The car has been
carefully maintained during the present ownership - the gearbox was rebuilt
by Roger Williams and a diaphragm clutch fitted along with uprated cwp and
Range Rover CV joints. The engine has benefited from a top end overhaul and
the radiator has been reconditioned.
The car drives very well with ample power, coping with the steep hills
around Hampshire very easily.
A large file of paperwork is supplied, including bills and details of work
carried out, plus a copy of the Repair Manual and much additional
information on Citroens of this period.
For more information please call me on

01420-474919.
We are located south of the Hindhead Tunnel (A3) between Petersfield and
Alton. Viewing by prior appointment please.
Delivery can be arranged at very competitive rates.
£12,995 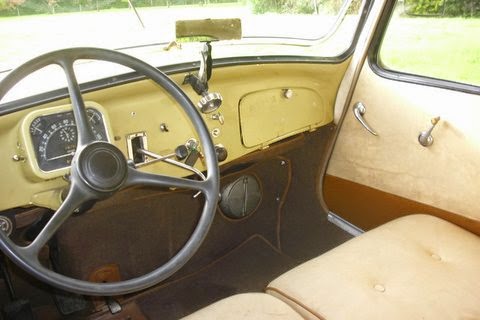 Please don't hesitate to contact me to discuss your requirements, I look forward to being of assistance.
Happy motoring!
Robin Lawton
Tel: 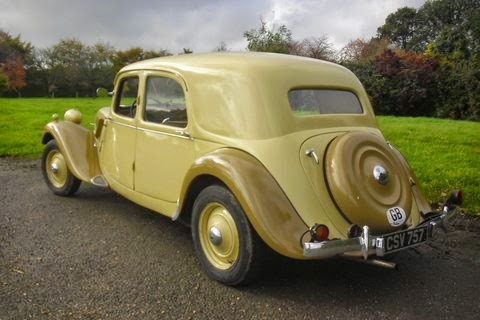 We would like to thank Robin Lawson Classics or their permission to allow us to highlight
the above vehice.
More Images can be found by visiting their website at:
http://robinlawton.com/sale.html
Posted by jeffharris at 15:15