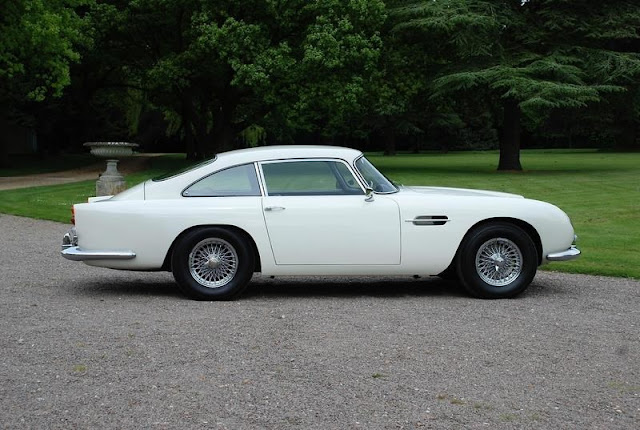 The DB4 was launched in October 1958 as the replacement to the successful DB2 and DB MKIII. However the new car owed nothing to its predecessor, being built with a new chassis courtesy of Harold Beach, body design by 'Touring' of Milan and a brand new 6 cylinder engine designed by Aston Martin's talented Polish engineer, Tadek Marek. The DB4 evolved over time with many improvements until its final iteration, the series 5, was introduced in September 1962. The series 5 cars were increased in length by 3', had faired-in headlamps, modified brakes, GT instruments, overdrive as standard and of course offered with the option of the more powerful Vanatge engine. Only 90 series 5 Vantage cars were built before production started on the almost indistinguishable DB5 in July 1963. This DB4 Series 5 Vantage was first registered in December 1962 by Callanders Garages Glasgow to a Mr Godfrey Scarth from Aberfoyle Perthshire. The factory specification was Desert White with Black Connolly as you see it today. Mr Scarth kept a meticulous log book of every single maintenance event undertaken on the car until the point he sold it in 1985. Subsequent owners continued with this log along with many invoices that make up the comprehensive history file that accompanies the car. The car has continued to be maintained to a high standard yet remains in a wonderfully original condition with a lovely patina of age.