"CLASSIC OF THE DAY"
British Classics Week
in association with

Something a little different today as we continue our look at Brightwells sale on Wednesday 26th November. Light commercials now seem to be getting the following they deserve with a dedicated magazine in Classic Van & Pick-Up and the inaugural Summer show held at Gaydon;s Heritage Motor Centre earlier this year.

1937 MORRIS COMMERCIAL POSTAL VAN
The General Post Office had a long-standing relationship with Morris, dating back to at least 1929 when the Royal Mail ordered a series of Morris Minor 5cwt vans.
Conceived during the course of 1929, the prototype 5 cwt van originally sported the 'Snubnose' radiator as found on the 1929 season 78 cubic feet capacity Morris Light Van. However when production commenced in September 1929, all 5 cwt vehicles were fitted with the Minor car radiator and short bonnet.
The van was powered by the 8hp OHC engine while its running gear was also identical to that on the Minor car range. During the course of the 1931 season the SV (Side Valve) Minor was introduced to sell alongside the OHC vehicles. An SV van was included in this range and was launched with little or no fanfare in April 1931.
The SV vans were rendered more spartan for GPO use with a three lamp Lucas lighting set in place of the five lamp set of the OHC vehicle, while the brightwork was also replaced by utilitarian black paint. The SV van continued virtually unchanged through 1932 and ‘33, retaining the scuttle fuel tank although regaining the chrome on its radiator and screen surrounds. In 1933 the van also gained Magna-type wheels.
Rather belatedly, the most significant orders for the vehicle came in 1932. The GPO placed an initial order for 12 vans for their Royal Mail division which was followed by further orders from their Post Office Telephones arm. Over the course of the next eight years Morris Motors were to supply many hundreds of 5cwt vans to the GPO.
In the last three years of production, the GPO purchased just over a thousand of these vans. When production ended, the GPO wanted to retain the trademark body style, so Morris produced a hybrid van for the GPO using the new Morris Eight chassis and running gear and the Minor Van bodywork. The 5cwt Van retained the older square-style radiator until the end of production.
This 1937 Morris Commercial Postal Van was acquired by the Stondon Motor Museum in 2003 from persons who had owned it since 1985. In very original condition, it retains its Godins of London coachwork and looks most striking in yellow with black wheel arches and a black fabric roof.
The van is supplied with an original Morris Commercial Post Office Manual, a V5 registration document, and 14 old MOT certificates dating back to 1968. Maintained in running order, this van has not been used on the road for some time and will doubtless require recommissioning before attempting any mail deliveries in future. 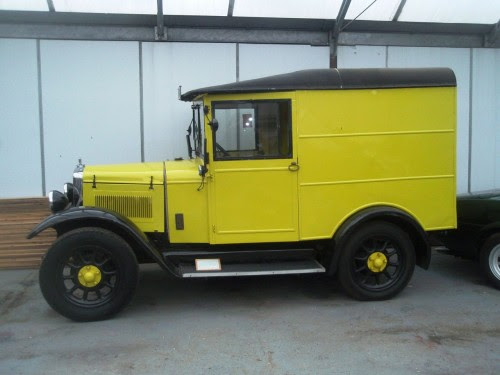