"CLASSIC OF THE DAY"
British Classics Week
We start of a week long look at some British classics that will come up for auction at Brightwells next sale on Wednesday 26th November at Easters Court, Leominster, Herefordshire. 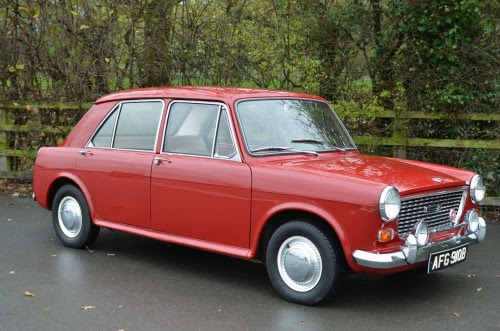 After his outstanding success with the Mini, Alec Issigonis set out to design a larger and comparatively more sophisticated car, again based around the Austin A-Series engine.
The motor would again be mounted transversely (driving the front wheels) and the car would feature disc brakes at the front. It was the first car to feature the space-efficient ‘hydrolastic’ suspension invented by Alex Moulton. The engine was enlarged for the new mid-sized model. Capacity went up to 1098cc by dint of a longer stroke. This, combined with a new cylinder head design took power from 37bhp at 4750rpm to a heady 48bhp at 5100rpm.
The 1100 model came to market in 1962 in both Austin and Morris guises. At first it was only available as a four-door saloon, though two- and three-door versions were soon added. Built at both Longbridge and Cowley, production reached more than 7,000 a week at its height. More than two million were made in total, going through three generations of development up to 1974, although the owners’ club estimates only 3,000 remain worldwide today.
This Tartan Red MkI dates from July 1964 and is believed to have covered only 39,000 miles from new, although there is insufficient history to warrant this. Apart from a respray many years ago, the vendor believes it to be almost totally original, especially the bodywork which he believes has never been welded and is said to show no signs of filler or previous repairs.
The only departures from standard are thought to be the badge bar and the period spotlights which are later additions, although a new exhaust has also been recently fitted. The cream interior is also thought to be original and has never had a radio fitted. The car is said to drive beautifully (“like an over-sized Mini”) with an MOT until July 2015. It comes with the original tool kit and an original owner’s handbook plus 9 old MOTs back to 1992 (at 36,700 miles). It also comes with a number of rosettes won at various shows.
Blessed with great steering, fine handling and a surprisingly nippy engine, these 1100s have stood the test of time remarkably well, offering a near-modern driving experience with crisp Sixties styling which will never go out of fashion. We like them a lot. 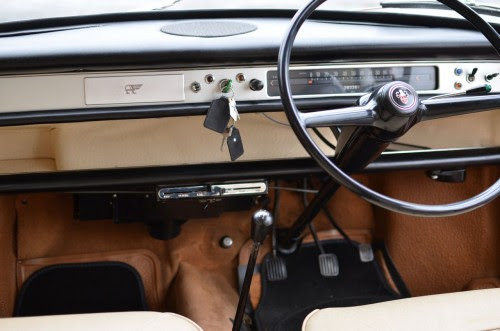 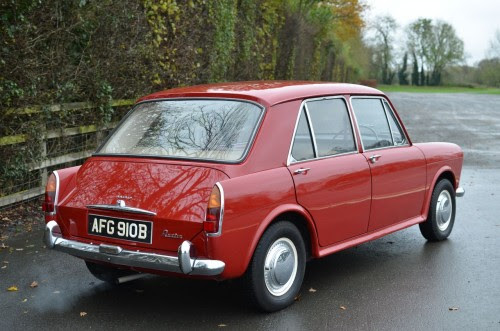 GENERAL SPECIFICATIONS
Not Above Vehicle

BMC badge-engineering ran rampant with the 1100/1300 range, Alec Issigonis’ extension of his Mini concept. The 1963 Austin variant was the best-seller thanks to front-wheel-drive, front disc brakes, interconnected Hydrolastic fluid suspension and a TARDIS-like interior. Performance was lively thanks to the A-series engines, in 1098cc and, from 1967, 1275cc sizes and handling came close to Mini standards. Much cleverer than their Ford, Vauxhall and Rootes rivals these cars consistently topped British sales charts but rust ferociously.