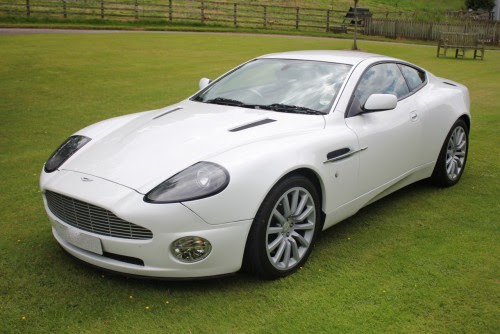 The last car to be handbuilt at Aston’s spiritual home in Newport Pagnell before moving to a mass production facility in Gaydon, the 2001 V12 Vanquish had ‘classic’ written all over it from the outset.
Designed by Ian Callum, its lines were reminiscent of the DB7 but its curves were deeper, its haunches sharper, its wide mouth more sultry below the animal stare of its headlight eyes. Its construction contained the DNA of endurance racing cars; a body tub made of heat-cured, bonded aluminium, braced by a central tunnel of carbon fibre, forming a shell of exceptional rigidity.
The suspension followed the latest high performance doctrine in materials and layout with aluminium double wishbones, coil springs, mono-tube dampers and anti-roll bars front and rear. Ventilated disc brakes clenched by four-piston callipers brought the big GT to a halt, while ABS and traction control managed the rubber on the road when conditions worsened. Even so, ride quality didn’t lose out; track car handling being matched by near saloon car ride.
Central to the Vanquish’s purpose was an engine capable of fending off the top European supercars; Ferrari, Lamborghini and Porsche. For its new car, Aston designed a V12, the 48-valve 6-litre unit developing 460bhp at 6,800rpm, with 400lb/ft of torque readily available in the engine’s mid rev range.
Racing technology infused the driver’s control of the car; 'drive by wire' throttle control and an electro-hydraulic change mechanism in the six-speed manual gearbox – a 'first' for a production car. In the cabin, the gearshift was controlled by F1-style paddles and could be operated in either of two modes - fully manual and computer-controlled automatic - with a 'sport' setting available on both. In the hands of a good driver, the Vanquish was capable of hitting 60mph in 4.5 seconds and carrying on to a top speed of 180mph.
Like the DB5 before, the smouldering GT was considered worthy of 007 in the film ‘Die Another Day’. And like James Bond, its impeccably tailored exterior oozed sophistication while leaving one in no doubt of the latent violence within.
Supplied new by HWM Aston Martin of Surrey in October 2001, this Vanquish has covered less than 28,000 miles to date with an excellent main dealer service history comprising 10 stamps to date, the last at HR Owen, Cheltenham, just a few hundred miles ago. Packed full of expensive extras (sat nav, premium audio system, integrated phone system, heated seats, Tracker, 2+2 seating etc), it cost over £170,000 new.
Originally silver, in 2008 it was treated to a £12,000 professional respray in white after an aggrieved spouse reputedly threw paint stripper over it! This led to a Cat D insurance claim but the car has since been inspected by Autolign where an ex-Aston Martin engineer declared that all the bonding agents are original and undamaged and the car has never suffered any structural damage, this inspection rendering it clear on the HPI register.
In magnificent condition throughout and driving as a Vanquish should, it has an MOT until October 2015 and comes with all its original manuals, the original AM battery conditioner still in its original box, the aforementioned Autolign certificate and service history plus many supporting invoices.
With only 1,492 V12 Vanquish coupes (and 1,086 Vanquish S models) made in total before it was replaced by the Gaydon-built DBS in 2007, this is a sure fire classic of the future and prices have already begun to rise... 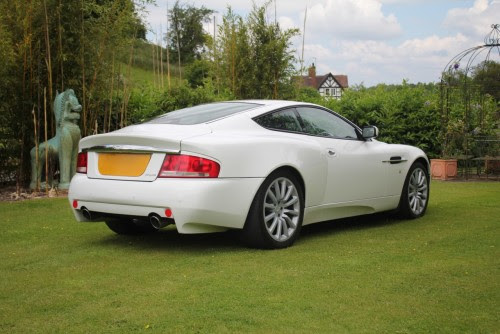 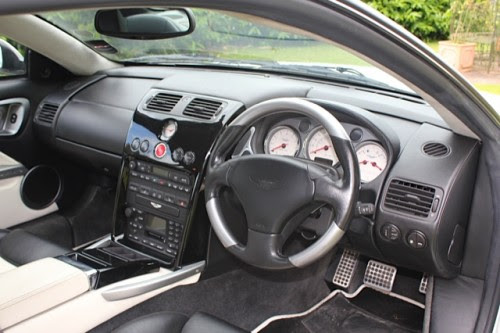