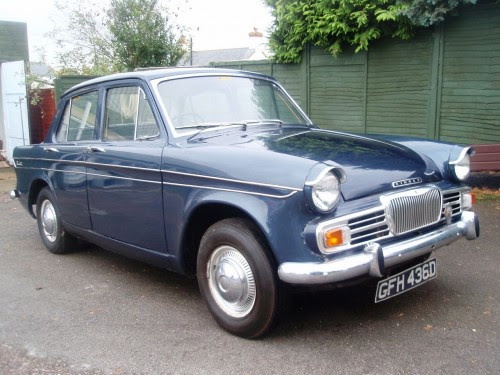 In 1956, Singer was taken over by the Rootes Group and the Gazelle was the first Singer to be produced following its acquisition, being badge-engineered version of the more mainstream Hillman Minx.
Both cars were built with the so-called 'Audax' body which incorporated significant input from the American-based Loewy Design Organisation (Raymond Loewy riding high on the acclaim he had garnered for his ground-breaking work for Studebaker). The Gazelle was distinguishable by its restyled nose, based around a traditional Singer grille. Under the bonnet, it also boasted Singer’s overhead cam engine with a single Solex carburettor.
In line with the prevailing ‘built-in obsolescence’ marketing strategy, the car kept getting small upgrades, each with a new designation, to let you keep one step ahead of the Joneses (provided your wallet could take it) and to ensure that there was always a better model to strive for.
So, pay attention now:
In September 1958 the car became the III, receiving better seats, enhanced at the front by a folding central arm rest. A new ‘duo-tone’ paint scheme was made available at the same time.
The IIIA of 1959 gained small tail fins and a larger windscreen. The engine was upgraded to twin Solex carburettors, distinguishing it from the Minx and lifting output to 60bhp. Home market cars got a floor gear change and as well as overdrive. Smith's Easidrive automatic transmission also became an option.
The 1960 IIIB received a new back axle featuring a hypoid bevel in place of the former model's spiral bevel.
In July 1961 the IIIc received a larger 1592cc engine was fitted, yielding 53bhp.
The IV was the last and rarest of the 'Audax' Gazelles. The engine was all new with a five bearing crankshaft and a capacity of 1725cc. Initially it developed 65bhp, but this was later reduced to 59bhp. Production finally came to an end in 1967.
Got that? Good, we’ll test you later.
This very late production 1725cc Gazelle IV is finished in blue with grey vinyl seats. Pleasingly, the car retains its original bill of sale from 23rd February 1967 when it was sold by Oscar Chess Ltd of Swansea to Mr Lloyd-Jones. Acquired by the Stondon Motor Museum in 1994, it has had only three owners in all and the recorded mileage of 32,845 is thought by the museum to be correct. Other paperwork consists of a handful of old MOT certificates and a V5 registration document.
Altogether a sought after variant of a handsome English sporting saloon with few owners and low miles.
Now, in what year did Smith's Easidrive transmission become an option? No cheating at the back!
AMENDMENT: This is a MkIV not a MkVI as stated in the heading in the printed catalogue.

With the Rootes Group now in control of Singer, the marque was set to become another exercise in badge engineering, pitched between Hillman and Humber in the pecking order. However, in the new Gazelle of 1956 – a plusher version of the Hillman Minx – Singer’s 1497cc OHC engine was used at first, but was replaced in 1958 by Rootes’ own OHV unit. Saloons, estates (rare and worth 25% more) and convertibles (pay double for those) were all available. Rootes updated the Gazelle almost every year until production ended in 1967, by then it had a 1725cc engine and less curves.