"CLASSIC of the DAY" 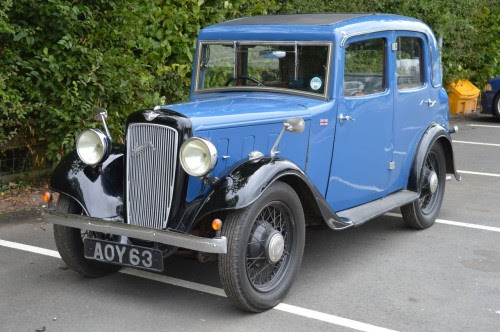 Launched in 1932, the 10/4 was Austin's best selling car in the 1930s and continued in production, with upgrades, until 1947.
It fitted in between the 'baby' Austin 7 which had been introduced in 1922 and the Austin 12, which was updated in 1931. It was powered by a four-cylinder side-valve 1125cc engine producing 21bhp and driving the rear wheels through a four-speed gearbox and open drive shaft to a live rear axle. Suspension was by half-elliptic springs all round and the brakes were cable operated. The basic model cost £155 and was capable of 55mph and 34mpg. It was rapidly followed by the Sunshine or De-Luxe with opening roof and leather upholstery at £168.
By 1933 the saloons had been joined by an Open Road tourer, a Conway cabriolet and a van. A sports model, the 65mph Ripley, joined the range in the following year. Mechanical upgrades for 1934 included a stronger chassis, synchromesh on the top two gears and 12 volt electrics. The first styling change came in late 1934 when the radiator's plated surround was replaced by one which was painted in body colour and given a slight slope. Synchromesh was added to second gear and semaphore type indicators were standardised. The four-light saloon was given the name Lichfield and got a protruding boot which enclosed the spare wheel.
The vast majority of the 290,000 Austin 10s had factory bodywork but a few escaped into the hands of the specialist coachbuilders, who at the time were struggling to find a market for their skills; the major manufacturers by then offering very comprehensive offerings at bargain basement prices.
Gordon and Co. Coachworks of Taunton Lane, Sparkbrook in Birmingham were however continuing to find customers and offered a range of up-market coachwork available on Austin and Standard chassis’.
This quaintly named Gordon Pixie Vitesse model was aimed squarely at the upper-middle classes who wished for an economical car with a touch of luxury. First registered in 1935, nothing is known of its early history until 1955 when the Buff log book shows it being taxed in the Croydon area. Its current registered keeper acquired the car in 2003 and has used it sparingly, 11 old MOTs being on file.
Reported as running and driving nicely, it is taxed until June 2015 and has been a popular attraction at Austin rallies where its rarity has caused much comment. Austin 10s have a very loyal following thanks to the excellent spares back-up, convenient size and the general ease of use. This one has the added bonus of standing out from the crowd.
Posted by jeffharris at 12:22