It's coming to that time of year when all us big boys & girls start writing to the man in the red coat and white beard, and thanks to Brightwells Auction they have collected together a eclectic mix of vehicles for their sale on the 24th September, it takes me back to the days of looking through the Autumn/Winter catalogue of the likes of Janet Frazer, Littlewoods & Kays when I was but a lad, searching for the all important Christmas presents.
Times change and so do  your want lists.so for Day 4 of our look at Brightwells sale we have chosen 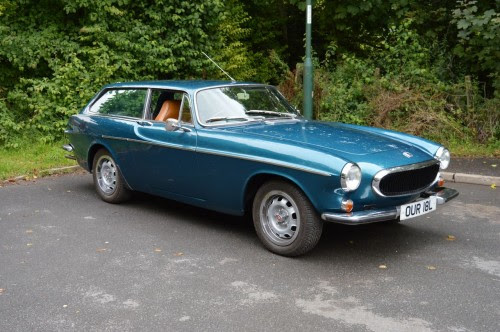 Launched in 1960, the strikingly handsome P1800 was Volvo's first attempt to enter the sports car market, though in truth it was more a boulevard cruiser than a racer.
The car shot to fame in 1962 when Simon Templar, played by Roger Moore, drove a white one in the hit TV series 'The Saint' (after Jaguar had refused to supply an E-Type because they didn't need the publicity!). Initially powered by a 100bhp twin-carb version of the faithful B18 1.8-litre engine, this was replaced by a two-litre B20 unit in 1969.
For 1970 numerous changes came with the fuel-injected 1800E, which had the B20E engine with Bosch D-Jetronic fuel injection and a revised camshaft, hiking power to 130bhp without sacrificing fuel economy. Top speed was 120mph and it could hit 60 in a respectable 9.5 seconds. The 1970 model was also the first 1800 to have four-wheel disc brakes, replacing the rear drums of the earlier models.
In 1972 came the last model of the range, the 1800ES, an estate version with an all-glass tailgate and folding rear seats that created a long flat loading area. Only in production for two years, just 8,077 of the ES were sold worldwide, making them a relatively rare sight today. Apart from looking a million dollars these cars are amazingly robust – a 1966 Volvo P1800S holds the Guinness World Record for the most miles covered on an original engine: over 3 million at the last count!
This well presented example has been inherited by the vendor from his long standing business partner who had owned it for more than twenty years. He embarked on a comprehensive restoration which involved a bare metal respray in the original colour scheme, having carefully repaired the bodywork as required.
The brakes were checked over and items replaced as necessary and the car built up with new rubbers and a replacement tailgate from a donor vehicle and a new lock. The engine has been upgraded with an unleaded head and the management system replaced, the vendor reporting that the car is now running very nicely. Fitted with a stainless steel exhaust it is taxed until the end of April 2015, and MOTd until October 2014.
These distinctive, practical and rare Sports Estates still look fantastic today and with the model's proven reputation for reliability, this smart example may still have the odd million miles left in it.
Posted by jeffharris at 13:03