Well September is here not long until Christmas, just thought i'd get that one in.

Our "Classic of the Day" 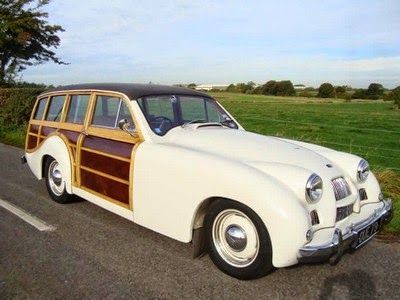 1954 Allard P2 Safari Station Wagon
Registration no. OUE 79
Chassis no. P2 4009
Engine no. G091257685RE
According to Tom Lush in his definitive book on Allard, the company built only ten P2 Safari station wagons. There are now only four remaining and this example is one of the best. Chassis number ‘4009’ was demonstrated and sold by Tom Lush to two elderly sisters in Birmingham, whose prime concern was that there should be sufficient room in the back for a sheep or goat. Anecdotally, ownership moved on via a lady near Shrewsbury in 1958 to a Lawrence Keating of Manchester around 1973, from whom the following owner acquired the car in 1988. It required a  ‘chassis up’ restoration, which was undertaken mainly by the Tamar Valley Motoring Centre. A  record is available plus all bills since 1988. The engine and gearbox were rebuilt by Wally Wheatley of Nordian Garages, considered at the time to be an authority on ‘flat head’ Ford engines, while the woodwork was painstakingly restored by a highly talented retired schoolmaster.
The car his been well maintained and used over the last 20-or-so years and is in almost original condition except for the colour scheme, white being preferred to the original metallic bronze. (This was done deliberately because it was the same colour as the only other P2 Safari in the UK). The upholstery is brown Connolly hide, which has been restored and is in lovely condition with, while the high quality carpeting has been partially renewed of late. Other recent refurbishment has included over £2,000 of work on the body, removing and replacing defective woodwork. Five new radial tyres were fitted three years ago and new rear shock absorbers last year, both contributing to an immensely improved ride.
21,000 miles have been covered since the restoration’s completion in 1992 and the accompanying extensive file of history testifies to the fact that this is a much-loved vehicle. ‘4009’ has taken part in the 40th Anniversary Sydney Allard Monte Carlo Rally, the Randonnée de Trios Vallées and several Norwich Union Classic Car events including a Euro Classic, while two years ago the car completed the AOC Pyrenean event, driving faultlessly through the north of Spain and back to the UK. The Safari appeared as the front cover story in Classic Cars magazine (December 1992) and is featured in David Fetherston’s book ‘Woodys’ published by Motorbooks International in 1995. Original correspondence with Tom Lush and others associated with Sydney Allard is included with the car, as well as a copy old-style logbook, current road fund licence, MoT and Swansea V5. ‘4009’ has been a concours winner in the past and needs only a little more love and attention to return her to that status. A truly lovely example of a very special car. Would make a great touring car for Goodwood.
The car has just had a reground crank, mains and big end bearings fitted and still requires running in.