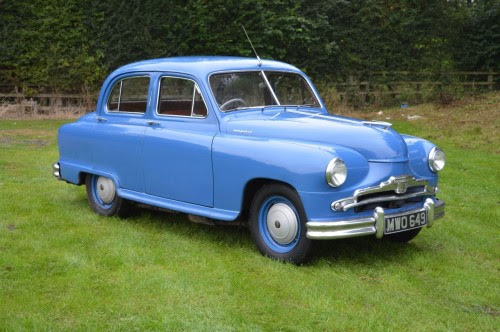 The stylish 1947 Standard Vanguard was the firm\'s first post-war introduction and was completely new from stem to stern.
Named after HMS Vanguard (it took considerable negotiation to get the Royal Navy to agree to let them use the name), the car was aimed squarely at the export market which swallowed virtually all of the production until about 1950 when they finally started to filter onto the car-starved home market.
The styling was heavily influenced by the ‘beetle back’ Plymouth and it was built on a robust chassis with a 2,088cc wet-liner engine that went on to power the Ferguson tractor, Triumph TR2 and the Morgan +4. Front suspension was independent and anti-roll bars were employed both front and rear. It had powerful hydraulic brakes all-round which were often put to good use, the car being good for 80mph.
The Phase II came along in 1953 featuring a more conventional three-box design. Mechanically similar to the earlier car, the only other significant departure was that a diesel version was made available, making it the first diesel powered road car to be offered on the open market, although its appeal was limited along with its sales.
This 1954 Phase II has been one family owned since new and comes with a good file of invoices and general history. It has covered only 72,800 miles in its 60 years to date, having been placed in dry storage in the family garage many years ago, although it is still recognised on the DVLA computer.
At some time in its life, an aftermarket 13amp water heater was fitted into its cooling system, presumably the owner being concerned about engine wear when starting on cold mornings. The vendor hopes to have it running again by the time of the sale, commenting that it is remarkably solid and in very original condition but will require recommissioning before use.
CATALOGUE AMENDMENT: Bidders are advised that the car is now running and the vendor has fitted 4 new brake cylinders so it stops as well....and the radio even works.
Posted by jeffharris at 09:26