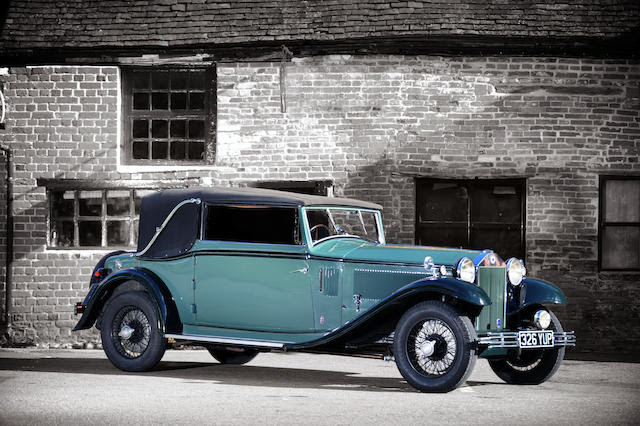 Coachwork by Carrozzeria Pinin Farina Chassis no. 30-2091 Engine no. 1094
€120,000 - 140,000
£94,000 - 110,000
Having established itself in the front rank of the world's finest cars with the Dilambda, Lancia further enhanced its exalted position with a succession of fabulous coachbuilt models on the Astura chassis in the 1930s.
One of the most gifted automobile engineers of all time, Vincenzo Lancia founded his own company in 1906, having previously been in FIAT's employ as chief test driver. Introduced in 1907, the first Lancia car showed an independence of thought and defiance of convention that would remain associated with the marque well into the modern era.

The introduction of the Astura and Artena in 1931 marked a switch from a system of model designation that used letters of the Greek alphabet in favour of one using Italian place names, a move in keeping with the nationalistic spirit of the age. One of Lancia's most important models, the Astura was powered by a new version of the company's familiar narrow-angle V8, first seen in 1922. The latter was enlarged from 2.6 to 3.0 litres on the Astura Series III in 1934 when the model also gained hydraulic brakes and became available in both short- and long-chassis forms. The Series IV featured a platform chassis of longer wheelbase, attracting some of the finest coachwork of the period, and was used extensively as official transportation by Italian government departments.

The history file indicates that the Astura was supplied new in May 1933 to Baron De Gunzburg, resident in Amsterdam. The car remained in Holland and in 1956 the title passed to the Suiker Brothers' garage. Records suggest the third owner of the car was a Mr Takken of 'vintage and veteran cars' in Harlem, a noted dealer. In February 1968 the car was rediscovered and purchased directly from Mr Takken. It was then used to tour Europe in search of original parts required for total restoration.

The rebuild commenced in 1972 with a full engine overhaul including crankshaft bearings and timing and water pump chains. Additionally, the suspension benefited from a complete rebuild front and rear, while at the same time the clutch and gearbox were overhauled and the electrics completely rewired. A stainless steel exhaust was fitted, including mufflers. In 1978, Dutch specialists under the guidance or European Lancia cognoscenti carried out a full restoration of the exterior and interior, which still presents beautifully. Since completion the Astura has been enjoyed and used regularly by the current owner, a distinguished and noted Lancia collector. The history file contains the original owner's manual and instruction book, complete with parts list published by Lancia in March 1932.

A matching numbers car retaining its original Pinin Farina body, this lovely Astura represents a wonderful opportunity to acquire an exciting and useable example of this rare post-Vintage Lancia.
Source:  BONHAMS AUCTIONEERS
For more Photos of this Lot & other vehicles available at thie prestigious sale visi
Zoute Sale
Posted by jeffharris at 09:59