We continue our look at next weeks Brightwells Sale and today we take a look at a German icon. 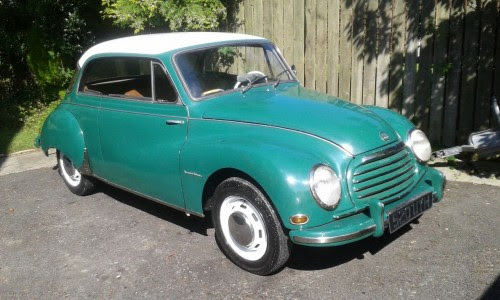 The smart and forward-thinking DKW was manufactured within the titanic Auto-Union group, makers of some of the finest racing cars the world has ever seen.
Before the Second World War, DKW had been Europe’s largest motorcycle manufacturer and a two-stroke specialist. Therefore, it wasn’t surprising that it brought its torquey, high-revving motors to its car models as well. The ‘3=6’ name was a direct reference to the engine’s ability to match bigger units of the time.
The 896cc motor was mounted longitudinally with the radiator behind and drove the front wheels through a three-speed transaxle gearbox (four-speed after 1953). Early versions produced 34bhp, but this was uprated to 38bhp in 1955 and 40bhp in ’56 . With no transmission tunnel, the compact two-door saloon was roomier than its most direct rival, the Volkswagen Beetle. An automatic option came to market in 1957 and the car was produced in saloon, cabriolet and station wagon versions.
With its torquey, high-revving engine and four wheel independent suspension – transverse leaf spring up front and trailing arms at the rear – the model showed its worth in European touring car racing and rallying in 1954 and ’55. This in turn led to a low and supper-sleek sports version built on the same chassis; the DKW Monza. Production of the standard models finished in 1959.
This 1956 pillarless two-door coupe – a rare version with ‘suicide’ doors – carries an interesting history, though unfortunately it is only anecdotal and not documented. The DKW was bought in Germany in 1960 by a Dutch artist called Sieger, who imported it into Holland for use as his everyday car.
In the mid-Nineties the car had a full body-off restoration but following its completion had very little use due to the death of the owner. It was then put into storage until acquired by a Dutch classic car dealer, from whom the present owner acquired it.
Closer inspection reveals the high quality of the Dutch restoration. The car underwent a thorough respray as well as repairs to the floorpan (the chassis itself appears to have had no welding and is still in excellent condition finished in clean black rust proof coating.) The leaf springs are in excellent condition, the brakes have been overhauled, and the steering and suspension linkages/joints are all clean and in good condition. The interior has been re-trimmed and is still very presentable. The only thing that lets the side down somewhat, according to the vendor, is the paintwork which is somewhat faded. A straightforward respray would transform the car.
Even though not required, the car has an MOT certificate (valid to August 2015 with no advisories) and is taxed until next July. An interesting and unusual car to own and an enthralling machine to drive, this is a far more interesting alternative to a Beetle and a very individual classic
Main Details Text & Images: WWW.BRIGHTWELLS.COM
SNIPPITS (Source: http://www.audi.de/corporate/en/company/history/models/dkw-36-sonderklasse-coupe-type-f-93-1957.html)
In the autumn of 1955, Auto Union GmbH presented its successful model, the 3=6 Sonderklasse, with a 10 cm wider body at the International Motor Show in Frankfurt. The equation 3=6 was coined for maximum advertising effect, a reference to the 3-cylinder 2-stroke engine with performance characteristics comparable to a 6-cylinder 4-stroke engine. In September 1957, the final version of the 3=6 was launched. Most prominent distinguishing feature were the doors, which were hinged at the front for reasons of occupant protection.
Engine: 3-cylinder, 2-stroke in line
Displacement: 896 cc
Power: 40 hp at 4,250 rpm
Maximum speed: 125 km/h
Fuel consumption: 9 litres/100 km
Price: DM 6,475
Series: 1955-1959
Production: 157,016 cars
Posted by jeffharris at 09:13