Good Morning
Over the next week we will be looking at some lots from Brightwells Auction to be held at Easters Court, Leominster.
With over 200 lots comprising of Cars, Tractors & Motorbikes there is a lot of tempting vehicles including a selection of restoration projects to keep you busy over the coming Winter months.
We kick off today with an interesting little vehicle in the shape of a
Hillman Zimp. 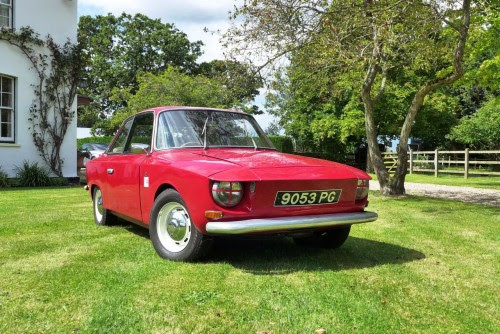 One of the most revered of all the Italian coachbuilders, the Milanese firm of Zagato is also one of the most idiosyncratic with designs that range from the sublime to the (er, how shall we put this?) difficult.
While cars don’t get much more beautiful than Zagato’s renderings of the Aston Martin DB4 and the Bristol 406, they also don’t get much more challenging than their reworking of the Aston Martin V8 and the Bristol Beaufighter. What all their designs have in common though, is an unfaltering commitment to light weight and aerodynamic efficiency.
The Zimp concept was born 50 years ago when Zagato saw the potential for an aluminium-bodied GT based on Rootes Group's impressive new Hillman Imp – a brilliant rear-engined coupe that could have been Britain’s answer to the Porsche 911 if only Rootes had been allowed to develop it. Keen to boost sales and sprinkle some Italian glamour on the Imp, Rootes gave Zagato the thumbs up and supplied them with three second-hand Imp Deluxe models sourced by Rootes marketing man, Peter Thomas.
Zagato transformed them into Zimps in just nine months so they could be exhibited at the 1964 Earl's Court Motor Show. While the floorpan and running gear were all standard Imp, the aluminium coachwork was designed by Ercole Spada (of Aston Martin DB4, Alfa Romeo Giulietta Sprint, Giulia TZ and Junior Zagato fame) and was pleasingly light and airy with an almost push-me-pull-you symmetry when viewed from the side thanks to the droop-snoot nose and tail.
Weighing just 630kg and powered by the fantastic free-revving 875cc all-alloy Coventry Climax FWMA-based Imp engine, the Zimp had a top speed of 87mph. A 'Small Car' road test from January 1965 (copy on file) praised the Zimp for its "splendid driving position, well-padded seats and very good handling" which "never gave us a moment's anxiety even on unexpected bends." They also praised the elegant looks and the aerodynamics, noting how quickly and thoroughly the bodywork shed rain, and how it seemed "to cut through the air rather than elbow it aside."
Unfortunately, shortly after the prototypes were shown (with a projected retail price of £1,200), Rootes fell prey to the industrial unrest that was to plague Britain for the next decade. With losses mounting by the month, there were no funds to spare for such a frivolous exotic and by the time Chrysler came to the rescue, the Zimp project had been consigned to the scrapheap.
All three prototypes were given away to Rootes employees engaged on the project in lieu of wages and, remarkably, all three still survive to this day: two in the hands of an owner in Hampshire and this one, which the vendor acquired in the mid-1970s.
The first of the three prototypes to be made, 9053 PG is unique in having adjustable 'eyebrows' over the headlamps (operated via a dasboard lever), although the reasoning behind these has been lost in the mists of time. The vendor, a noted Zagato enthusiast, a personal friend of the Zagato family and a frequent visitor to the Milanese workshops, has questioned many people involved in the development of the car, including Ercole Spada himself, but none can recall just how these eyebrows came about.
When acquired the car had spent several years in a chicken coop on a farm in Bedfordshire but was then dumped outside when the farmer's son, whose car it was, went to university (dad clearly believing that chickens came before Zagato prototypes where accommodation was concerned!).
Luckily the Zimp had not deteriorated too badly and the vendor embarked on a leisurely restoration which eventually saw the car returned to the road in 1995 looking exactly as it had when it left the Zagato works in 1964 and also benefitting from a rebuilt engine and gearbox.
With less than 1,000 miles under its wheels since the restoration was completed, the car remains in very good order throughout and is said to run and drive well although it has not been used on the road since its last MOT expired in 2006. It comes with a few spares including a new water pump, new clutch assembly, new headlamps and new aluminium door kick plates.
A very well-known car that has been featured in numerous magazine articles over the years (several of which are included in the history file), this intriguing prototype also comes with original black-and-white photographs showing it being built at the Zagato works in 1964 and a copy of a sketch of the car that Ercole Spada dashed off in a matter of seconds while at a dinner party with the vendor just a few years ago.
A fascinating machine from the ‘what might have been’ drawer of motoring history, this unique prototype has excellent provenance, would grace any collection and is sure to be of interest to all Zagato aficionados.