Day 3 of our look at the upcoming auction from Brightwells which will be held on 24th September at Easters Court, Leominster. For today we have chosen one of the various restoration projects which are due to cross the block, all you need is a very understanding bank manager, wife or partner and a nice warm garage for those long Winter nights. 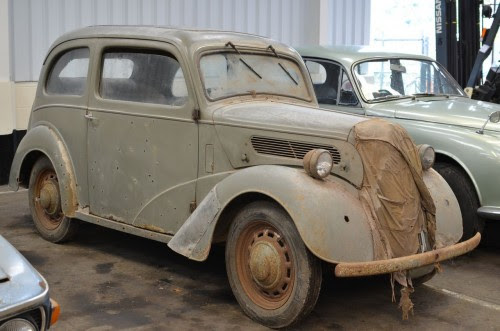 The Ford 103E is best known to most enthusiasts as the ‘sit up and beg’ Popular.
Launched in 1953 as a budget addition to the Anglia and Prefect range, it hit the market at the perfect time as second-hand cars were virtually unobtainable. It was powered by Ford’s trusty old side-valve four-cylinder engine, now in 1175cc capacity, which gave it a 61mph top speed with 35mpg economy.
For sale alongside the more modern three-box monocoque Prefect/Anglia it won many friends for its unpretentious basic design which, despite a lack of such luxuries as a heater or passenger windscreen wiper, performed sterling service with considerable charm.
This Pop was bought new by one William Moore in 1954 from his local Ford garage in Wolverhampton. In 1971 he became ill and the car was parked up in an outbuilding, placed on blocks, covered up and left there for the next 43 years.
Recently exhumed, it is said to be in totally untouched and original condition and would be a fine candidate for a straightforward restoration. Supplied=-ohgcwith the original buff log book and a more modern V5, KNT 824 shows only 56,000 miles on the clock which is almost certainly genuine.
Being offered here at no reserve, it now needs a second owner to sympathetically restore it to a condition that William Moore would recognise from when he last drove it over four decades ago.

When Ford announced the 100E range in 1953 production of the old Anglia and Prefect ceased. However in an effort to offer a budget "entry" model, Ford dusted off the Anglia E494A tooling to produce the "new" 103E Popular, an old Anglia with a new name.
The 103E really was "no frills" motoring. The styling was pure 1930's, as was the old sidevalve four cylinder, although it was at least larger than before at 1172cc. There were few creature comforts in the Popular, it had a single wiper (vacuum powered!), no heater, vinyl trim and little chrome plated brightwork. Despite the Popular's poverty specification over 150,000 cars were produced from 1953-1959.
Buyers Guide Ford Popular/Anglia 1937-1959 featured in Practical Classics June 2008 – available from our sister site Bookbase.  Click Here to view