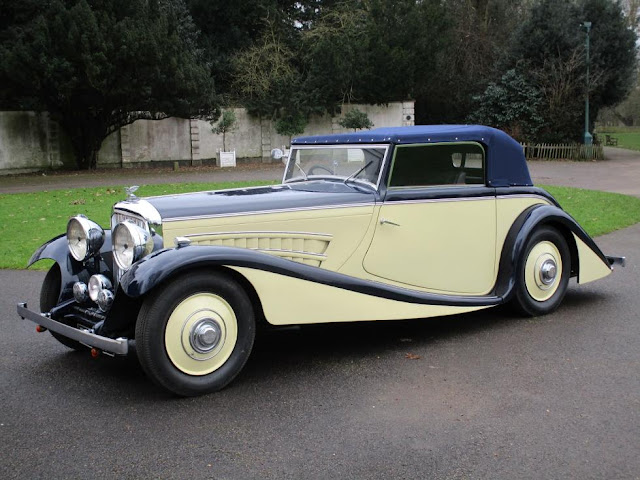 1935 BENTLEY 3.5 Litre
During the late 1920s and early 1930s Bentley ran into grave financial trouble and by 1931 Rolls-Royce had stepped in and bought the assets and goodwill of the defunct company and formed a new one, Bentley Motors (1931) Ltd. Rolls-Royce had considered the Bentley marque to be a growing threat to their future success, but following their purchase decided to continue the Bentley name, albeit under their own stewardship, taking the company in an entirely new direction with the creation of the Silent Sports Car or Derby Bentley. In 1933 the new Bentley 3.5 Litre model was released and was an instant success.
The combination of effortless power and style met with almost universal praise. It was powered by a developed twin-carburetor version of Rolls-Royces own 20/25 model and was installed in a low 126-inch wheelbase chassis that basically remained unaltered until the cessation of production in 1939 due to the outbreak of hostilities. Synchromesh was present on third and fourth gears and the Derbys were fitted with a cross-flow cylinder head and superb servo assisted brakes, encapsulating all of the perfection of Rolls-Royce engineering in this small sporting Bentley. Fitting of individual coachwork by approved body builders continued in true Rolls-Royce fashion giving potential buyers a great deal of choice in the look of their new motor car. Chassis No B65BN was completed in September 1935 and delivered to its first owner Miss Phyllis Robins shortly afterwards. It was fitted with three-position drophead coupe coachwork by Corinthian of Kilburn Lane in London NW10.
It is understood that only three bodies were produced by Corinthian, two for Lagonda Rapiers and just a single body for this Derby Bentley, making B65BN unique. The sales order from Conduit Street records that the car was supplied to Miss Robins of Baker Street in central London by Chester & Cole Ltd. The striking coachwork appears to be a beautiful mix of transatlantic and continental designs, with Art Deco features. 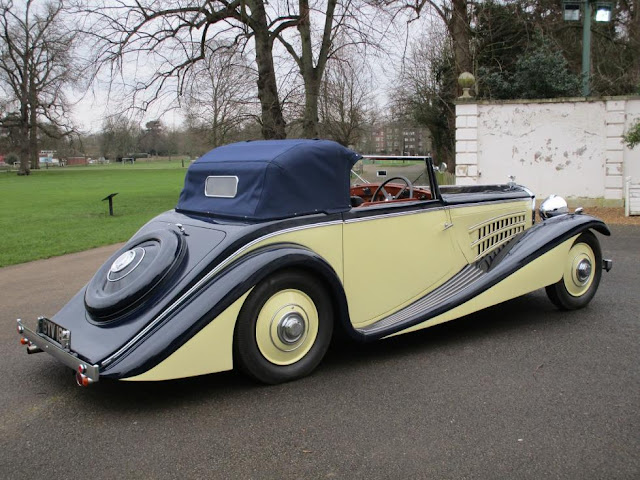 The combination of the extended bonnet, angled windscreen and rakish extended sweep to the rear result in a very pleasing and attractive appearance. Miss Robins kept the car for just a few months and sold it in December of 1936 to Mr. J James of Stockton on Tees who retained it until 1945. In August of 1945, he sold it to Mr. R Taylor who kept the car just a few months, selling it in December 1945 to Mr. F Porter of Liverpool. He, in turn, kept the car until January of 1951 before selling it to Mr. R Rathbone in West Kirby in the Wirral. Chassis No B65BN changed hands for the final time in January of 1959 when it became the property of a family in Liverpool. They have retained ownership from 1959 until the present day. The car was used between 1959 and 1965 before it was put into storage for approximately twenty years after falling into a state of disrepair. During the mid-1980s the coachwork and ash frame underwent significant restoration at the family's request.
Mechanically speaking the car was deemed to be in good order at this time, however, in the 1990s further aspects were tended to. By the late 1990s, the back axle required completely overhauling, so it was dispatched to Fiennes engineering where the crown wheel and pinion, bearings, and differential were renewed. In 2003 Fiennes was then instructed to completely overhaul the clutch. The car was then driven sparingly before being stored once again, between 2007 and 2011. By 2011 the family decided to invest further in B65BN, instructing a detailed inspection of the car by one of the worlds most respected Derby Bentley specialists. Over the following few years, bringing us to the present day, the following works were carried out to B65BN by said specialist, all executed to a very high standard.
The front suspension was re-built, the radiator was overhauled, the engine was overhauled, the coachwork was restored and re-painted, the interior was replaced, restoration of the hood frame and a new hood in dark blue mohair and re-chroming to a number of areas of the brightwork. The works listed above do not cover the whole process, details of which are available upon request. The works are documented in the cars history file, available to be viewed at our London showroom. The result is a car of great quality and one that drives absolutely beautifully. It is quiet, powerful and superbly prepared in every respect. It should be driven in person to be truly appreciated. Chassis No B65BN represents an excellent opportunity to acquire a fully prepared, extremely stylish Derby Bentley built to a unique design and in our opinion, it should be seriously considered by collectors and enthusiasts alike. 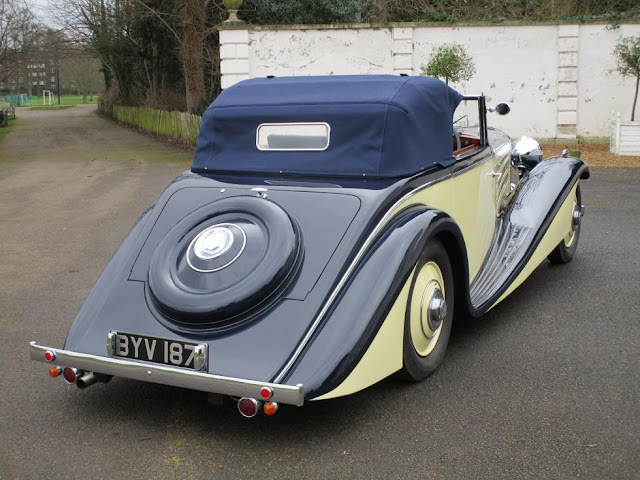 If you would like to make an inquiry about this vehicle, please contact us by phone on 020 8847 5447 or by email at sales@frankdale.com