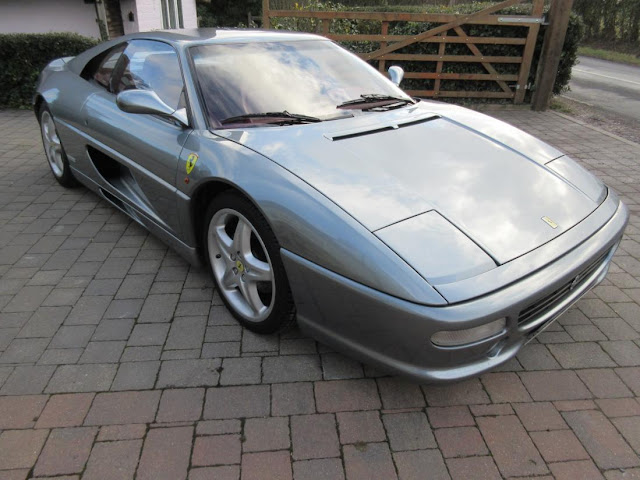 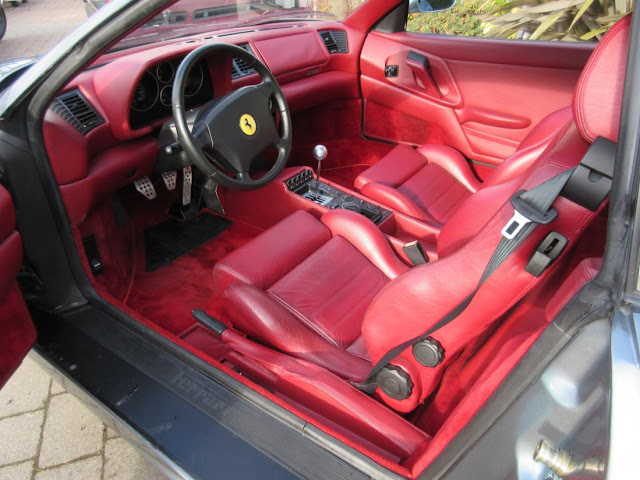 : The car went into production on Friday 14th January 1997 and was completed eight days later on the 22nd January 1997. Finished in Grigio Titanio FQ/3238 with Bordeaux 4481 with Rosso 176 carpets. Additionally the steering wheel was finished in Bordeaux rather black hide (VQ)-now black- and Zona "A" , the upper dashboard finished in the same Bordeaux hide (ZE) Upon completion the car was shipped to the Belgian Ferrari agents Spa Franchorchamps and first registered HYS 437 to Mr. V L of N SPRL of Bruxelles. The car passed into the ownership of a second owner in Belgium Mr. F (?) circa 2005, who apparently did not register it in his name.The car was discovered by Dorset motor dealer, Mike Hinkling who was particularly attracted to the colour combination and following an inspection by his mechanic, purchased by him. He brought the car the car back to the UK and sold it on to motor dealer Ben Mather of the Mather Collection in Gloucestershire ,who in turn sold it on to another motor dealer Mr Nicholas Dove of Gloucestershire, who had former Bob Houghton technician, Peter Chambers, carry out a full engine out cam belt replacement service and MOT and had the car UK registered to on the 1st December 2015.The Bordeaux steering wheel being replaced along the way for a black item.The car was sold one month later, to the managing director of a London insurance broker Mr. R H of Essex, following an independent inspection by East Anglian Ferrari agents, Lancasters -who videoed the inspection to an Essex based businessman on the 22nd January 2016 were is joined a 2001 Ferrari 456 M GTA.The car is complete with its original factory service book complete with eight stamps -six of which were main dealers, handbooks leather wallet and tools. 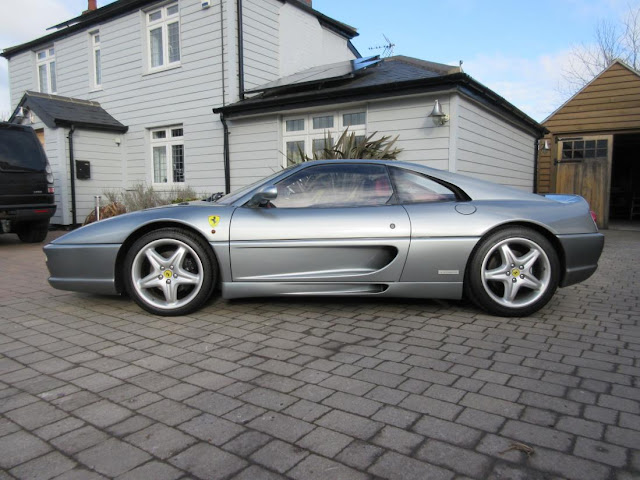 History: 1994Unveiled at the 1994 Geneva Motor Show, the F355 Berlinetta quickly became the benchmark in its class. The increased power of the new 5-valve per cylinder V8 was complemented by a truly exceptional chassis, with extremely efficient, electronically controlled suspension.The synergy between all of these added up to a car that delivered both breathtaking handling and performance and the kind of timeless, elegant Pininfarina lines enthusiasts had come to expect.The DesignThe design of every new Ferrari model is, by definition, heavily influenced by the Marque’s culture and experience combined with innovations developed as a result of both active experimentation and research. The result is a melding of style and engineering that delivers superb performance across the board. In the case of the Pininfarina-designed F355, the fusion of familiar elements with more powerfully innovative ones resulted in a truly unprecedented car that guaranteed the same signature Ferrari emotions as ever. The F355 was a masterful piece of engineering as its 109 hp/litre specific power output attests. The latter value and its impressive torque were achieved by adopting a new five-valve cylinder head. The car’s 3496 cc engine punched out 380 hp. Its blistering performance figures were the result of aerodynamic honing that focused specifically on the underbody.The BodyThe two-seater F355 Berlinetta had an aluminium and steel body. Its styling was moulded around an aerodynamically severe design that included a full-body undertray designed to equalise downforce (Cl) between the two axles. The cabin was designed with both safety and driving pleasure in mind. The seats and trim were Connolly leather. Composite racing seats were also available to order. The chassis was a steel monocoque with a tubular steel rear sub-frame for the engine-suspension assembly. Both front and rear suspension used independent unequal-length wishbones and coil springs over gas-filled telescopic electronic dampers with two settings. The car also has anti-roll bars. The steering was rack and pinion with power-assist and optional mechanical gear. The brakes had self-venting discs and excludable ABS ATE. The 18” wheel rims were magnesium. The mid-rear 3496 cc 90° V8 was longitudinally mounted and punched out 380 hp, giving it a specific power output of 109 hp/l. Distribution was by means of twin overhead cams with five valves per cylinder. The con rods were titanium, while the control unit was the Bosch M5.2. Dry sump lubrication and a six-speed plus reverse mechanical gearbox completed the picture along with a dry single-plate clutch.Taken from Ferrari's own website 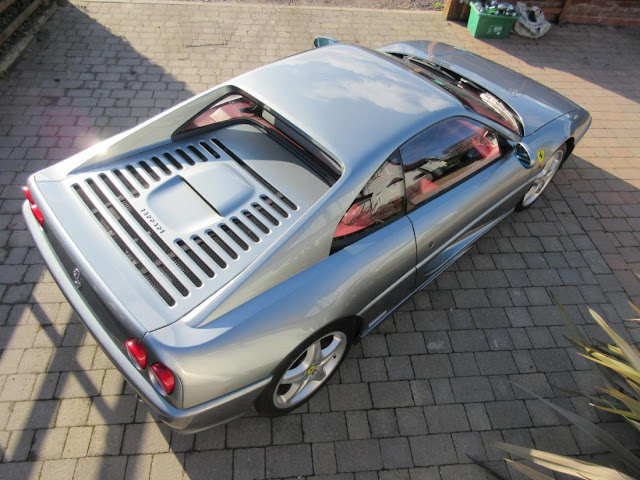