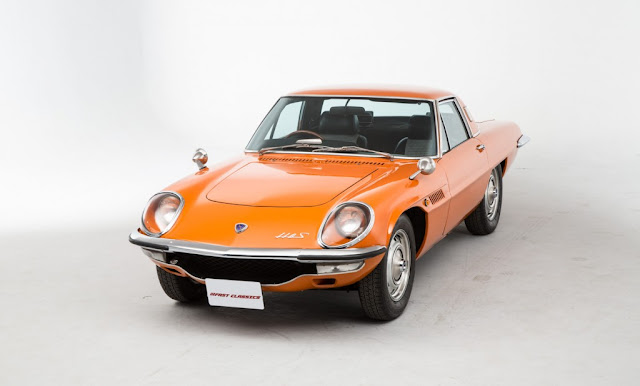 1968 MAZDA COSMO 110S
Although founded in the 1920s, the company that would become Mazda Motor Corporation did not commence series production of passenger cars until 1960. Only four years later the Japanese firm exhibited its first rotary-engined prototype, having acquired the rights to produce NSU’s Wankel-designed engines. In 1966 Mazda launched its first rotary, the Cosmo L10A, which went into production the following year. Mazda’s flagship model, the Cosmo, was powered by a twin-rotor engine displacing 982cc and producing 110bhp which was enough to endow the pretty two-seater coupé with a top speed of 110mph.
While the Cosmo was a comfortable grand touring car in road-going trim, Mazda was keen to demonstrate its competition capabilities, and at the same time allay any fears about the reliability of their Wankel rotary engine. To this end, the factory entered two cars in the 1968 Marathon de la Route, an 84-hour test of endurance held at Germany’s famed Nürburgring circuit. The Cosmos ran near the front of the field during the entire race, with one retiring in the 82nd hour and the other going on to finish 4th overall behind two works-entered Porsche 911s and a works Lancia Fulvia 1.3 HF.
Production was limited, and when the Cosmo was phased out in 1972 only 1,519 had been made, of which 1,176 were the Series II L10B version. In the world of collectible Japanese cars, the Mazda Cosmo ranks in the top tier, alongside its high-performance Toyota and Nissan competitors, the 2000GT and the Skyline GT-R 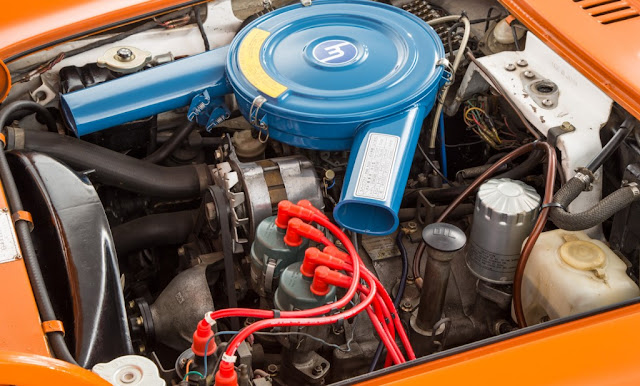 This fabulous little sports coupe appears as if on the move standing still, with a dynamic pair of swage lines and grille slats framed perfectly by distinctive chrome fixings front and rear. Having been treated to a full respray in January of this year the car presents in charming custom orange – a suitably period colour that comprehensively accentuates the cars flowing lines.
Bright work has survived very well indeed, framing the windows and screens nicely whilst mirrors and door handles show in excellent order. More recently the front headlight lenses have been replaced and and bumpers re-chromed.

At only 45.9 inches high the Cosmo requires care upon installation where you are met by a no-nonsense dash; a cockpit affair with toggles for wiper speed and the electric radio antenna. To the left of the speedo and tach are an amp gauge, fuel gauge, clock and an innovative map light; a rotating eye that illuminates things nicely. The vinyl dashboard remains tight and clean whilst gearbox tunnel and door cards retain good texture and show tidily with a rich patina. An under dash radio / cassette leaves entertainment to the passenger whilst the Pioneer radio speakers on the parcel shelf are thought to be original. A refurbished Nardi wheel and original wooden gear knob offer something softer and more elegant in an otherwise plain cabin.
The contrasting houndstooth and vinyl seats appear to have survived well and maintain good support and integrity.

The Series I/L10A Cosmo was powered by a 0810 two-rotor engine with 982 cc and produced about 110 hp (thus the 110 name). It used a Hitachi 4-barrel carburetor and an odd ignition design – two spark plugs per chamber with dual distributors. The aural drama of a wankel rotary is extraordinary; a unique blend of high pitched scream and jet-engined thrust that accompanies the keen performance.
Having been subject to a recent oil change the car runs smoothly and is enjoyable out on the open road.

The clean design of the 14 inch steel wheels is illuminated by an alluring chrome lip and hub cap arrangement – unmarked and free of pitting or corrosion wrapped in period GT special rubber.
The brakes have had some recent attention and pull the car up smoothly with no adverse pitch or pull.

Having been built in 1968, this Cosmo was caught in the mid-model update making it a very rare “Series Middle” comprised of a Series I short wheelbase chassis and running gear but adorned with the updated cosmetic features such as the larger air dam of the Series II.
As the world’s first production Wankel rotary-powered car, and one of only 343 Series 1 examples, the Cosmo stands as quite a unique prospect.
The car is supplied having recently been imported with all taxes paid and UK registered. 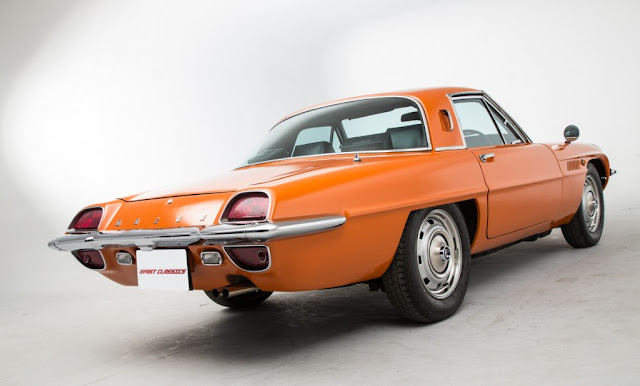 CLASSIC CHATTER
Powered by Dragons
Posted by jeffharris at 14:13